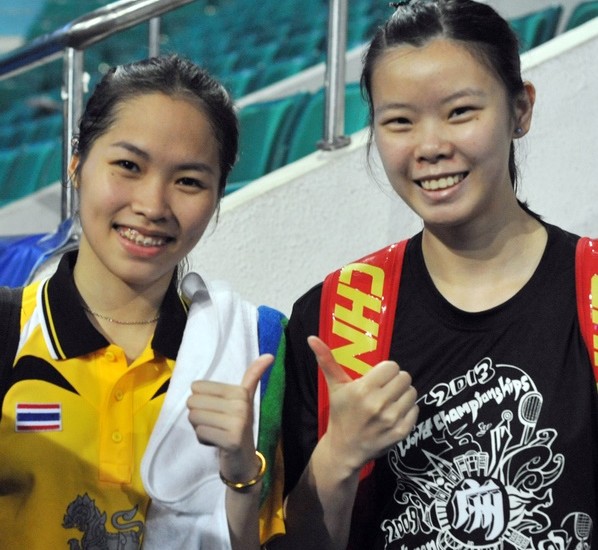 There could be no more fitting a finale to a week of superb action at Tianhe Indoor Gymnasium, than for the two greats of contemporary badminton to clash yet again for a major Men’s Singles title. No doubt the last match of the event will be the one everyone wants to see – will hometown hero Lin Dan retain his crown and celebrate a fifth World championship or will it finally be his Malaysian nemesis’ turn to savour glory?

Four-time winner Lin Dan and world No. 1 Lee Chong Wei (top right) took contrasting routes to the final. While Lin Dan was at his imperious best against Nguyen Tien Minh of Vietnam, Lee had to climb out of a hole against China’s Du Pengyu in today’s semi-finals.

Nguyen briefly led the reigning champion 6-4, but after that it was the Chinese ace all the way. In characteristic fashion, he controlled the pace of the match, making Nguyen run all around the court before rearing up to smash. The 21-17 21-15 result ensured he advanced to the final without dropping a game in five matches.

“It’s unbelievable to be in the final again, especially after being away so long from badminton. I will be well prepared for the final – just as Chong Wei will be, I’m sure,” said the popular Lin Dan.

Lee Chong Wei, by contrast, ran into a stubborn opponent in Du Pengyu (China, 3). Down 10-17, the first game appeared beyond the reach of the world No. 1, but Lee refused to give up and saved four game points before losing it 22-20. The Malaysian then stepped on the gas in the second and third games, taking the match 20-22 21-12 21-15. Du – the tournament’s iron man – spent an average 71 minutes on court each round.

“I will be ready and I will give my best. I have extra motivation because of my family and my son,” said the man who has often been thwarted by the Chinese superstar. Meanwhile, Lin’s compatriot Li Xuerui (BWF home page with Ratchanok Intanon) gave herself a shot at the one significant honour missing from her ever-expanding trophy cabinet. Her clinical demolition (21-5 21-11) of Korea’s Bae Yeon Ju in the Women’s Singles semi-finals hinted strongly that she is intent on setting that right. Her opponent will be Ratchanok Intanon (Thailand) who was just as impressive against Indian giant-killer PV Sindhu. Intanon was victorious in 36 minutes against a shaky Sindhu: 21-10 21-13.

The biggest surprise of the day was the defeat of Women’s Doubles Olympic gold medallists, Tian Qing/Zhao Yunlei, to Korea’s Eom Hye Won/Jang Ye Na: 21-16 21-19. The Chinese were dominated throughout by the eighth-seeded Koreans (left). Left-handed Jang was the difference between the two sides, creating openings from the back court and smashing with precision and power.

Christinna Pedersen and Kamilla Rytter Juhl might have harboured thoughts of a similar upset as they took on defending champions Yu Yang/Wang Xiaoli of China in the second Women’s Doubles semi-final. Although the Danish pair fell behind, they played sensationally in the second game, hitting and blocking flawlessly. However, they couldn’t sustain that momentum in the decider and Yu/Wang reasserted their dominance, winning the match: 21-14 14-21 21-15. * Four-time Men’s Doubles world champions Cai Yun and Fu Haifeng failed in their quest for a fifth title after being outplayed by Indonesia’s Mohammad Ahsan/Hendra Setiawan 21-19 21-17. The latter scored their third straight win over the legendary Chinese with another smart tactical performance. They face Danish No. 3 seeds Mathias Boe/Carsten Mogensen (centre above), who recovered from an early slump to beat Kim Ki Jung/Kim Sa Rang (Korea, 5) 21-23 21-18 21-18. * It wasn’t a happy day for Korea as they suffered three losses compared to one win. The Mixed Doubles pair Shin Baek Choel/Eom Hye Won was overpowered by Xu Chen/Ma Jin (China, 1). Choel and Eom did not play badly but such was the attacking intensity of the Chinese that they stood no chance during the 21-15 21-17 defeat.

* Indonesia had lots to cheer about. All England winners Tontowi Ahmad/Liliyana Natsir (right) continued their recent dominance over Olympic and defending World champions, Zhang Nan/Zhao Yunlei, beating them 15-21 21-18 21-13 to qualify for the Mixed Doubles showdown versus Xu Chen/Ma Jin.