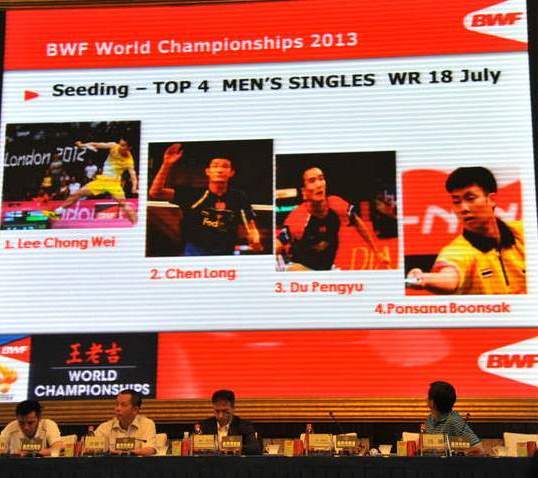 drawn in opposite halves today in Guangzhou, China.

World No. 1 Lee Chong Wei (Malaysia) and four-time World champion Lin Dan (China) have been involved in the keenest rivalry of recent times. Lin Dan’s qualification on a wild card meant he might have run into Lee before the final, but the draw (draw ceremony; below centre) has kept them in separate halves. Barring major surprises, a repeat of the last World Championships and Olympic finals could be on the cards. Lee’s biggest early test could be Wang Zhengming (China, 14) in the third round, followed by Du Pengyu (China, 3) in the semi-finals, while Lin Dan might have to contend with No. 2 seed Chen Long (also China) in the quarter-finals. Before he plans the quarter-final meeting, however, Lin Dan will have to get past Sattawat Pongnairat (Thailand) in the first round and possibly Kenichi Tago (Japan, 5) in the second (BWF home page; Men’s Singles top seeds).

The others likely to make an impact at the championships are Tommy Sugiarto (Indonesia, 8), winner of his first Superseries in Singapore recently, and Marc Zwiebler (Germany, 11), both of whom are drawn in the same quarter as the world No. 1. The Women’s Singles (left; top seeds) appears an open contest. Li Xuerui (China, 1) and Wang Yihan (China, 2) head the opposite ends of the draw, but there are several players capable of preventing an all-China final. Wang Yihan – eager to defend her crown – will be wary of a possible third-round clash with either PV Sindhu (India, 10) or Aprilla Yuswandari (Indonesia), while Olympic champion, Li Xuerui, cannot take Lindaweni Fanetri (Indonesia, 9) for granted in her third round. With several other contenders, such as Saina Nehwal (India, 3), Tai Tzu Ying (Chinese Taipei, 6), Sung Ji Hyun (Korea, 5) and Ratchanok Intanon (Thailand, 4) in the draw, the Women’s Singles winner will be hard to predict.

Men’s Doubles: Irrespective of the seedings, the pair to watch is the Indonesian combination of Mohammad Ahsan/Hendra Setiawan (6). The two have been in irresistible form, winning the last two Superseries and beating the top pairs with astounding ease. Ahsan/Setiawan are in the same quarter as top seeds Lee Yong Dae/Ko Sung Hyun (Korea), and that should be an interesting match – considering the Koreans have lost three finals to their rivals this season. The other duo to keep in mind is All England and India Open champions Liu Xiaolong/Qiu Zihan (China, 7). Liu/Qiu’s first big test might be their expected third-round clash against Angga Pratama/Ryan Agung Saputra (Indonesia, 10). On paper, the title favourites are Lee Yong Dae/Ko Sung Hyun and four-time World champions Cai Yun/Fu Haifeng (China, 8), who are drawn to meet in the semi-finals, with Denmark’s Mathias Boe/Carsten Mogensen (3) are expected to qualify from the bottom half of the draw. Women’s Doubles: China have lost the Women’s Doubles gold at the World Championships only once since 1983 – and that impressive streak might well continue. Top seeds and defending champions, Yu Yang/Wang Xiaoli (China), are favourites to come through from the top half, while the bottom half might be a contest between Olympic champions Tian Qing/Zhao Yunlei and Ma Jin/Tang Jinhua (2). Others who may have a say are Ayaka Takahashi/Misaki Matsutomo (Japan, 3), Bao Yixin/Zhong Qianxin (China, 7) and Christinna Pedersen/Kamilla Rytter Juhl (Denmark, 4).

Mixed Doubles: Indonesia’s Liliyana Natsir will be hopeful of her second world crown after winning the 2007 edition with Nova Widianto. Tontowi Ahmad and Liliyana Natsir have been in good form lately, winning three of the four Superseries they have taken part in this year, and are fairly certain of making the semi-finals. Fourth seeds Joachim Fischer Nielsen/Christinna Pedersen (Denmark) too appear to have a comfortable draw until the semi-finals, with their main threats Muhammad Rijal/Debby Susanto (Indonesia) in a possible third-round clash. The top two seeds Xu Chen/ Ma Jin (1) and Zhang Nan/Zhao Yunlei (2; defending champions) – both from China – remain formidable contenders as always.