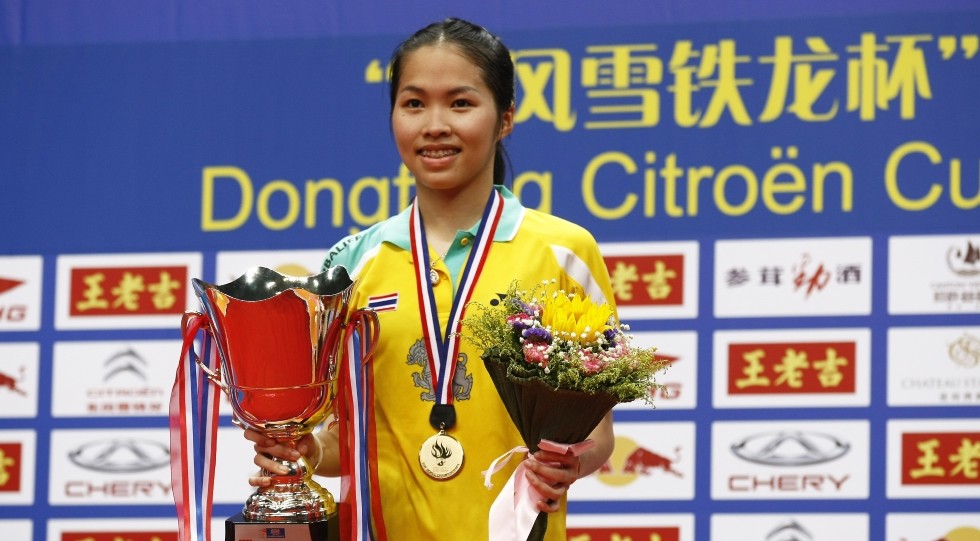 Defending champion and hometown hero Lin Dan became the only player to win five world titles when Malaysia’s Lee Chong Wei retired match point down due to cramps. Lin was leading 16-21 21-13 20-17 when Lee crouched on the court, unable to move. The result meant China and Indonesia shared honours on finals day with two titles each.

“People doubted how far I could get having been out of competitive badminton for almost a year. I have shown that what counts is one’s attitude and spirit and the sacrifice one is willing to make,” said a reflective Lin Dan (left: sharing his victory with wife, Xie Xingfang), hailing his opponent’s effort to try and wrest his first World Championship.

“Lee Chong Wei didn’t want to give it up. I’ve had the kind of cramps he had. You cannot move when you’re cramping like that. Sport can be so cruel sometimes.”

The Men’s Singles final did not live up to its billing. Lee was authoritative in the first game and he won it easily but the second was a nightmare for him. The

Malaysian made numerous misjudgements of the lines, enabling his opponent to go 12-1 up and easily win the game. Lin was content on playing at a reduced pace with high tosses and Lee was unable to break the rhythm.

Lee took a handy 10-6 lead in the decider but yet again became erratic, allowing Lin to score nine out of the next ten points. Although the top seed showed glimpses of brilliance, he just couldn’t string it all together. Lin Dan got to match point with Lee cramping (centre below) and rooted helplessly to his spot. Despite medical attention and a valiant effort on Lee’s part to continue, he could not finish the match and had to be stretchered off. Lin’s victory salvaged the day for China after two upsets. Although the day began auspiciously for the hosts, with Yu Yang and Wang Xiaoli retaining their status at the pinnacle of Women’s Doubles, the next match did not follow the script. World No. 1 and Olympic gold medallist, Li Xuerui – the overwhelming favourite – suffered an uncharacteristic lapse in the first game and was eventually blitzed by Thailand teenager Ratchanok Intanon in the Women’s Singles showdown; the riveting contest hinting at the prospect of a new and exciting rivalry.

Already a trailblazer, having won a hat-trick of World Junior titles, Intanon became the youngest Singles World champion of either gender; the first Thai player to cop the coveted crown and the first woman in 14 years to wrestle the Women’s Singles championship from Chinese hands – the last being Denmark’s Camilla Martin in 1999 in Copenhagen.

“Tomorrow is Mother’s Day in Thailand and the Queen’s birthday so this is a gift for my mother and for the Queen,” said the beaming Intanon, hardly able to believe her achievement though admitting she was “relaxed” in the biggest match of her young career.

Down 12-19 in the first game, Intanon closed the gap to 17-19, and then saved three game points before remarkably clinching the opening honours – grabbing ten points to just one by Li. The Thai’s variety of stroke play, control at net and precise smashes helped offset Li’s superior speed and power.

The resilient Chinese forced a third game, but level-headed Intanon was able to keep a lead and at all times, thanks to some errors from the top seed at crucial junctures. As the shuttle landed wide to seal Intanon’s place in the annals of badminton – 22-20 18-21 21-14 – the 18-year-old sank to her knees in tears (middle photo; centre above) as fans stood to applaud her feat. Li congratulated the winner, noting Intanon “played really well” and put her under “a lot of pressure” when she was trying to execute her strategies. Indonesia’s Tontowi Ahmad and Liliyana Natsir (centre above) effected an improbable escape act of which Harry Houdini would have been proud, saving two match points to snatch Mixed Doubles glory from a shocked Xu Chen and Ma Jin of China. The Indonesians began in stunning fashion, with veteran Natsir intercepting everything at net and Ahmad flying high to smash steeply. After 11-9 in the second game, however, the pattern shifted – Ma Jin asserted herself and Xu Chen sustained pressure with huge smashes.

The lead stayed with the Chinese all through the final game. The only factor that kept the Indonesians in the hunt was Natsir’s brilliance at net. While Ahmad faltered under pressure, she took charge, darting around the front court and clipping sharp winners. It looked over for Indonesia at 18-20 in the third, but Ahmad lifted his game at the critical moment and the Indonesians finally saw a drive go long to give them a memorable win at 21-13 16-21 22-20.

“This is amazing. We just kept fighting. We had to…this means so much to us and to the people of Indonesia,” said Natsir, whose interviews were interrupted by a call from the President of Indonesia. Koreans forced a decider. In the final game, the Chinese lifted their level and the Koreans were not even allowed double digits. The match was over in 69 minutes: 21-14 18-21 21-8.

* After the disappointment of losing the London Olympics final, Denmark’s Mathias Boe and Carsten Mogensen had more bitter pills to swallow, being outplayed in the World Championships final as well. This time it was the turn of Indonesia’s Mohammad Ahsan/Hendra Setiawan to deny them. Ahsan and Setiawan – the standout pair in Men’s Doubles this season – were in sublime form, winning the title without losing a game. Setiawan’s control and subtle flicks at the net, combined with Ahsan’s booming hits from the back court, saw them to a quick first-game win. Boe and Mogensen recovered to make a fight of it in the second, holding two game points, but the Indonesians caught up and closed out the match 21-13 23-21.

“I knew that with Hendra we could become World champions but I didn’t expect it within a year,” declared a happy Ahsan (left: arms raised in triumph).