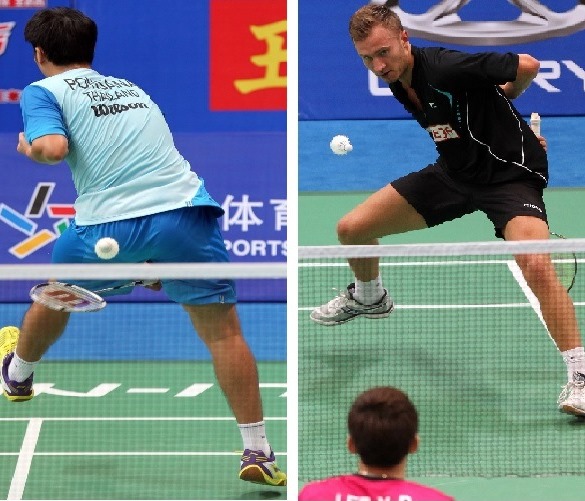 China enjoyed a perfect day at the Wang Lao Ji BWF World Championships 2013 today, winning all 14 matches in which they figured. Most of their players expectedly breezed through but there were some hard-fought victories as well. Men’s Singles third seed Du Pengyu, 14th seed Wang Zhengming and Women’s Singles seventh seed Wang Shixian were all taken to three games. Wang Zhengming survived a torrid test from Russian giant Vladimir Ivanov. The latter stayed level until the late stages but couldn’t oust the former world junior king who triumphed 16-21 21-9 21-18.

Du, who endured a three-game match in his first round, had another testing battle, with Tanongsak Saensomboonsuk of Thailand keeping him on court nearly an hour (21-5 16-21 21-15). Similarly, Wang Shixian (left) was tested in a marathon 84-minute encounter by Pai Hsiao Ma (Chinese Taipei): 21-17 21-23 21-11. Both Du and Wang, however, were able to close out the third game comfortably.

Men’s Singles second seed Chen Long took his time to settle down against Japan’s Sho Sasaki. Chen initially appeared tentative, and Sasaki was able to go ahead 10-6, but once the top gun found his rhythm, his opponent could do little to stop him from unleashing huge smashes. The 21-15 21-12 outocme gave Chen a third-round appointment with Liew Daren of Malaysia.

Liew’s compatriot, Lee Chong Wei, is China’s biggest threat to the sweep they are hunting, but the world No. 1 was in trouble

against Dionysius Hayom Rumbaka. The Indonesian was in sizzling form, firing big smashes and piling up points at will. The Malaysian looked worried at the start of the second game, but his astounding defence came to the rescue. Throwing himself around to return several sure winners from Rumbaka, Lee slowly turned the match around and, by the end of the third game, Rumbaka was disheartened, falling: 14-21 21-18 21-11. Lee admitted afterwards that he was “surprised” at the level to which Rumbaka raised his game.

The Women’s Doubles contest between Lee So Hee/Shin Seung Chan (Korea, 13) and the Malaysian duo, Ng Hui Ern/Ng Hui Lin, was a thriller. The two pairs were locked tensely all through the third game, with the advantage shifting either way. The Malaysians had two match points but the Koreans equalised, only to lose three of their own. Eventually, they converted their fourth match point – 21-13 20-22 25-23. * In Men’s Doubles, Mohammad Ahsan/Hendra Setiawan took a mere 18 minutes to dismiss Ronel Estanislao/Paul Jefferson Vivas (Philippines) 21-9 21-12. Boasting three Superseries victories this year, the Indonesians are among the favourites for the world crown.