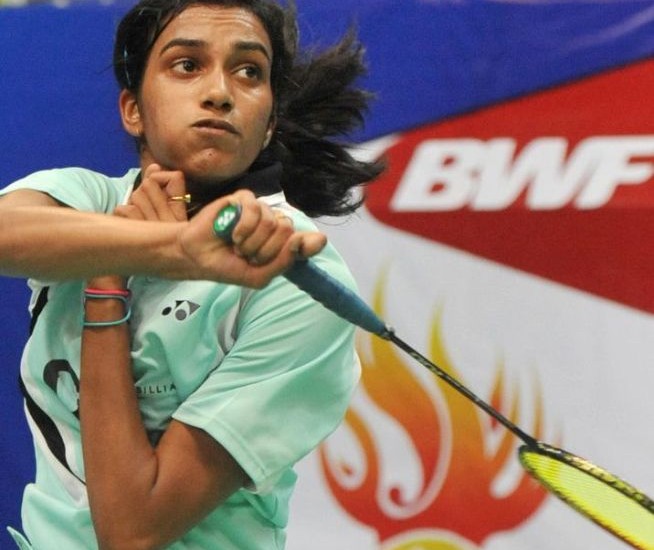 As Wang’s forehand drifted wide of the court, lanky Sindhu (BWF home page) punched the air in triumph and the crowd, whose noisy support had spurred on the local favourite, fell silent inside the Tianhe Indoor Gymnasium in Guangzhou, China.

The 21-18 23-21 scoreline indicated it had not all been Sindhu’s way – the Chinese title holder had given her utmost – but what a mature performance from a fresh-faced 18-year-old in the opposition heartland.

She was always a few points ahead in the opening game, matching Wang shot for shot and appearing the more energetic and unrelenting. The trend continued in the second game and Sindhu was able to build a 16-11 lead. Though Wang fought valiantly – amid long, punishing rallies – and even withstood three match points at 20-17 and earned a game point, her rival was not to be denied a great victory. Finally, she closed the match out on her fourth attempt.

“I’m very happy. I have been working hard. She is an experienced player but we (players from India) are getting better and now we are able to beat the top Chinese players,” said the smiling winner who must beat Wang Shixian again for a place in the semi-finals.

Gracious in defeat, Wang Yihan noted her conqueror is among a young crop of singles players who are good enough to oust elite competitors like her. She

lamented being unable to capitalize on the game point she had, acknowledging she hesitated at key stages while Sindhu seized the opportunities which arose.

The tournament’s ‘round of 16’ also produced some seismic shocks for Korea as Men’s Doubles No. 1 pair Lee Yong Dae and Ko Sung Hyun were ambushed by Lee Sheng Mu/Tsai Chia Hsin (Chinese Taipei): 14-21 21-14 21-19. Their Women’s Singles team-mate and fifth seed, Sung Ji Hyun, lost a nail-biter to Spaniard Carolina Marin despite having three match points in the third game.

As mayhem spread across all five categories, the Koreans caused some of their own to temper their disappointments. Shin Baek Choel and Eom Hye Won ousted fancied Mixed Doubles campaigners, Joachim Fischer Nielsen/Christinna Pedersen of Denmark (centre below). Coming from a game down, the Koreans defeated the No. 4 seeds, 17-21 23-21 21-18. * India had a dream day, with three players entering the quarter-finals. Sindhu was joined by Saina Nehwal in Women’s Singles while Kashyap Parupalli made the last  eight in Men’s Singles. Nehwal had a 5-0 record going into her match against Porntip Buranaprasertsuk, with her Thai opponent last taking a game off her in 2008. However, Nehwal rebounded from losing the first game to win 18-21 21-16 21-14. * Robert Mateusiak and Nadiezda Zieba of Poland were desperately close to upsetting eventual silver medallists Xu Chen and Ma Jin (China) at the Olympics. They will have another chance tomorrow as they clinched a quarter-final spot against the top seeds by beating Vitalij Durkin/Nina Vislova (Russia) 21-18 21-15.