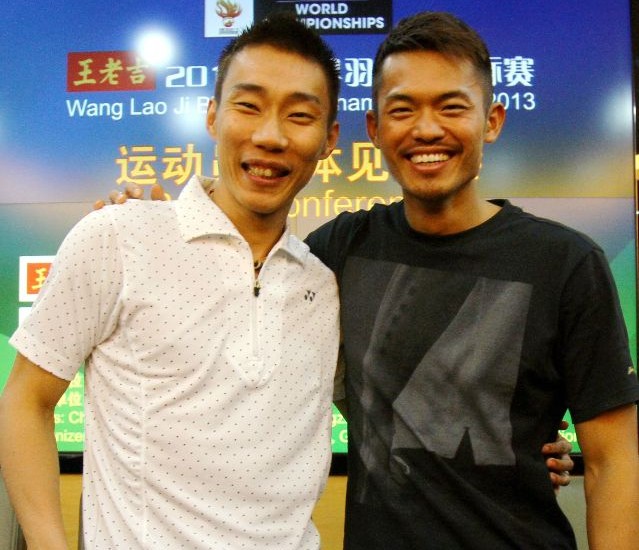 Speaking at today’s pre-tournament press conference in Guangzhou, China, Men’s Singles stars, Lin Dan and Lee Chong Wei (featured image), said they have both come to the eagerly-anticipated event having trained hard and in good shape and will be doing their best to wrest the coveted crown for themselves and their respective countries – China and Malaysia.

Seated side by side and facing the global media, they agreed the challenge of the younger generation – spearheaded by Lin’s compatriot Chen Long – will not be easy. Vowing to fight for every point, Lin hailed it an honour to defend his title and thanked the Badminton World Federation (BWF) for the opportunity to do so by granting him a wild card. It would be a fifth world championship for him if he were to win.

“I may be one of the oldest players now but I have trained with the same intensity. What matters most is the (player’s) attitude,” said Lin Dan (centre below) who took a self-imposed hiatus from badminton after clinching his second gold medal at the London 2012 Olympics.

“I have come prepared to win the world title again. My fans will see the best from me.” His archrival and friend, Lee Chong Wei, also spoke in a serious manner about his desire to add the prestige of a world championship to his impressive trophy chest. He and Lin Dan are in opposite halves of the draw and, if fans’ prayers are answered, would clash in the finale next Sunday.

“The World Championships is important to all players and I have come close when I lost in the final (in 2011). This time, I will do my best to win it,” vowed the world No. 1 player, promising a better showing than his silver-medal finish at last summer’s Olympics. Earlier, China’s top women’s player and world No. 1, Li Xuerui, and Ratchanok Intanon of Thailand were cautious about their prospects of lifting the Women’s Singles title. The latter – at age 18 already a three-time world junior champion – said she is not looking too far ahead but will take the tournament match by match and gain experience.

Li Xuerui (left), who rose sensationally from the shadows of more illustrious team-mates last season to capture eight titles including Olympic glory, said she feels “no pressure” even with the knowledge that she could be China’s lone hope in the late stages of competition.

“This is my first World Championships but I have played a lot and I have faced that situation before,” said the ever-calm athlete.