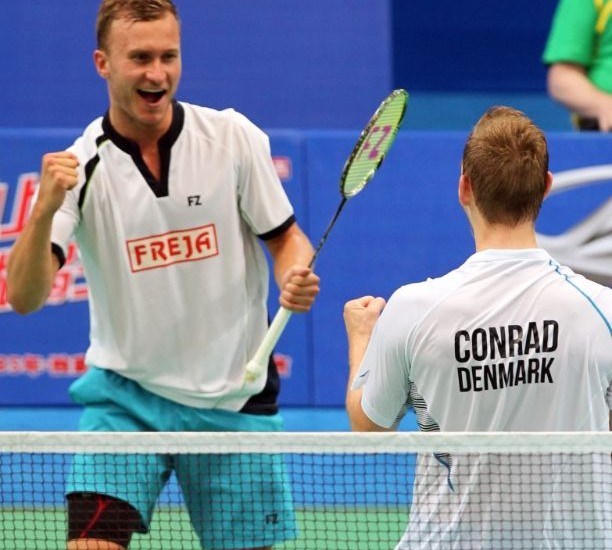 The highlight was the second-round Men’s Doubles contest between Rasmus Bonde/Mads Conrad-Petersen (Denmark) and Yonathan Suryatama Dasuki/Hendra Aprida Gunawan (Indonesia). The Danes (featured image) survived four match points in the second game to force a decider which they won after being pushed all the way: 14-21 25-23 21-18. Kolding and Rytter Juhl came together late last year, stretching Olympic silver medallists Xu and Ma (centre above) in the French Open Superseries. For a while today, they looked capable of toppling the No. 1 pair as they played an intelligent game to gain the advantage. Keeping the shuttle close to the net and avoiding the high tosses, they took Xu Chen out of the game. The lack of chances to smash seemed to affect the hard-hitting Chinese. The Danes took the first game and had a handy lead at 10-6 in the second, but the Chinese worked their way back into contention. At 16-all, it looked like the match could go either way but Kolding and Rytter Juhl were inconsistent on crucial points. That was all the help the hometown duo required to take proceedings the distance. In the third game, the Chinese grabbed the ascendancy as Xu repeatedly uncorked his big smashes. The Danes could not cope, succumbing 18-21 21-17 21-13.

Elsewhere, the Mixed Doubles landscape was seriously shaken up with the departures of fifth seeds Chan Peng Soon/Goh Liu Ying (Malaysia) and other seeded * None of the top Women’s Singles players were in action, but China’s Jiang Yanjiao, once ranked world No. 3 before slipping to No. 24, conceded a walkover to her opponent Marija Ulitina of Ukraine.

* Denmark won’t have a representative in the second round of Women’s Singles after both Line Kjaersfeldt and Sandra-Maria Jensen crashed out. Kjaersfeldt was beaten by Tsz Ka Chan (Hong Kong), 18-21 21-8 21-9, while Jensen was outplayed 21-6 21-19 by Belaetrix Manuputi of Indonesia.