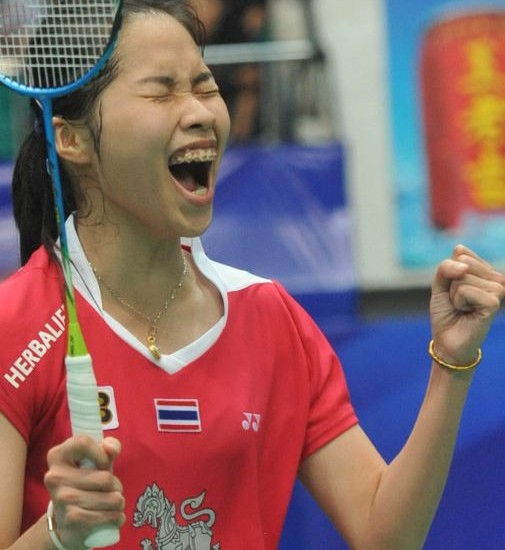 The only other disappointment for the hosts was the upset of Women’s Singles seventh seed Wang Shixian at the hands of Indian teen PV Sindhu: 21-18 21-17. Sindhu faces fellow 18-year-old Thailand’s Ratchanok Intanon (BWF home page) for a place in Sunday’s finale; both young stars knowing they have already secured bronze medals for themselves and their countries. Intanon squandered three match points in game two but rebounded to overcome feisty Carolina Marin of Spain (21-18 20-22 21-15).

“I’m very proud and happy to get at least a bronze. It’s a great result for Thailand. I will try to do even better tomorrow,” said the three-time World Junior champion.

Among the anticipated quarter-finals today was the all-China affair between four-time champion Lin Dan and second seed Chen Long. The two haven’t played a tournament match since December 2011. Lin Dan has played only one tournament since his Olympics victory last summer while Chen Long (centre below) has risen fast as the top-ranked Chinese player.

Lin Dan delivered a master class in the first game and Chen was left wincing in desperation as the defending champion outplayed him in all departments. Chen was unable to use his fearsome smash as Lin Dan kept the shuttle on a leash, slowing the pace and playing precisely to the lines. Chen regrouped in the second game and it became a neck-and-neck contest. A smash into the net finally gave Lin Dan another semi-final place, and a shot at yet another world title.

The other Chinese winners included four-time champions Cai Yun and Fu Haifeng, who withstood doughty resistance from Hiroyuki Endo/Kenichi Hayakawa (Japan, 4) in their Men’s Doubles quarter-final. Endo and Hayakawa matched the Chinese smash for smash and dive for dive as they made it a close contest in the second game, but Cai and Fu eventually prevailed: 21-13 22-20. The Mixed Doubles semi-final will see All England champions Tontowi Ahmad/Liliyana Natsir (Indonesia) take on Olympic champions Zhang Nan/Zhao Yunlei. The Indonesians survived a nervous end to their quarter-final against Kenichi Hayakawa/Misaki Matsutomo as the Japanese saved five match points before Ahmad/Natsir closed it out: 21-10 17-21 21-19.

* Mixed Doubles eighth seeds Robert Mateusiak and Nadiezda Zieba (Poland) would have expected to stretch top seeds Xu Chen and Ma Jin as they had done at the Olympics but the Chinese destroyed them in just 24 minutes. Xu and Ma triumphed 21-4 21-4 and will face Korea’s Shin Baek Choel/Eom Hye Won. The latter had a surprisingly easy victory over Indonesia’s Muhammad Rijal/Debby Susanto: 21-9 21-15.

* In Men’s Singles, India’s Kashyap Parupalli came within a heartbeat of a semi-final place and an assured medal but had to endure heartbreak instead. After winning the first game comfortably against third seed Du Pengyu of China, he had big leads of 11-4 and 14-9 – and match point at 20-19 – but Du climbed level before powering ahead in the third game. The 16-21 22-20 21-15 result was Du’s fourth three-game match. The tournament’s iron man has spent 285 minutes on court! * The Men’s Singles thriller between Nguyen Tien Minh (Vietnam) and Jan O Jorgensen (Denmark) stood out. Towards its closing stages, several long rallies ensued, and both players threw themselves around desperately. Jorgensen saved four match points to level at 20-all. Nguyen (centre above) appeared exhausted but summoned the reserves to fire the winning smash – 21-8 17-21 22-20 – before sprawling flat out on the court.

“I never believed I could get a World Championship medal. This is amazing. I am so happy,” the veteran player declared.