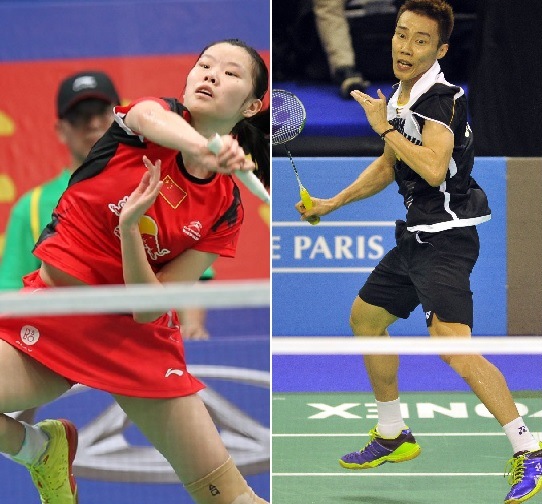 If being the top seeds for the Li-Ning BWF World Championships later this month is a good omen, then Malaysia’s Lee Chong Wei and Li Xuerui of China should be in

They head the seedings in Men’s Singles and Women’s Singles respectively for the prestigious tournament following today’s announcement by the Badminton World Federation. Both star shuttlers faltered in the finals of last year’s World Championships and will be keen to make amends at Ballerup Super Arena in Copenhagen.

China’s Chen Long will be at the other end of the Men’s Singles draw as the No.2 seed while Jan O Jorgensen will be hoping the No.3 seeding brings him luck on home turf. Defending champion Lin Dan’s non-qualification for these championships means there will be a new king in Men’s Singles and the likes of Kenichi Tago of Japan and Indonesian, Tommy Sugiarto – seeded fourth and fifth respectively – will also fancy their chances of succeeding the five-time winner. They are followed by Wang Zhengming (China); Son Wan Ho (Korea); Du Pengyu (China); Hu Yun (Hong Kong) and Hans-Kristian Vittinghus (Denmark) to round out the top ten seeds in that order. There are 16 seeds in the Men’s Singles draw and a total of 64 competitors in this category. In Women’s Singles, Wang Shixian and Wang Yihan are seeded second and third, thus ensuring none of China’s top trio will clash before the last 16. Next is No.4 seed and reigning World champion Ratchanok Intanon of Thailand who will be seeking to repeat her historic feat of year ago. The 19-year-old is followed by Korean duo Sung Ji Hyun at No.5 and Bae Yeon Ju, seeded sixth. A resurgent Saina Nehwal of India is seeded No.7 and Tai Tzu Ying of Chinese Taipei is the No.8 seed. Spain’s Carolina Marin is the highest-placed European in the Women’s Singles draw at No.9 while Porntip Buranaprasertsuk of Thailand is the No.10 seed and last year’s bronze medallist, P.V. Sindhu of India, is at No.11 out of 16 seeds and a total of 48 players in Women’s Singles.

The intriguing battle for Men’s Doubles honours could come down to the leading two pairs – the title-holders and No.1 seeds Mohammad Ahsan/Hendra Setiawan from Indonesia and Korean sensations, Lee Yong Dae and Yoo Yeon Seon. The latter are the No.2 seeds and should arrive in Denmark on a high; having clinched the last three MetLife BWF World Superseries tournaments and boasting an impressive 5-1 winning record versus the Indonesians. Danish pair, Mathias Boe and Carsten Mogensen, are the No.3 seeds with Hiroyuki Endo and Kenichi Hayakawa of Japan seeded No.4 and another Korean partnership – Kim Ki Jung/Kim Sa Rang – seeded fifth. Others to note are Lee Sheng Mu/Tsai Chia Hsin of Chinese Taipei (No.6); Malaysia’s reunited union of Hoon Thien How and Commonwealth Men’s Doubles gold medallist, Tan Wee Kiong (No.7); and Liu Xiaolong/Qiu Zihan of China, seeded eighth. England’s Chris Adcock and Andrew Ellis are the No.14 seeds in a draw featuring 48 pairs. China’s Bao Yixin and Tang Jinhua have underlined their stand-out performances in Women’s Doubles over the past nine months by locking down the No.1 seeding ahead of hometown favourites and No.2 seeds, Christinna Pedersen and Kamilla Rytter Juhl. Japan’s consistent team of Misaki Matsutomo/Ayaka Takahashi are in at No.3 followed by last year’s winners, Yu Yang and Wang Xiaoli, of China. Veteran Yu will be hunting her fourth World title in this category. Their team-mates and Olympic champions, Tian Qing and Zhao Yunlei, are the No.5 seeds with the upcoming Jang Ye Na and Kim So Young of Korea seeded sixth among a list of 48 pairs. Indonesia’s Greysia Polii and Nitya Krishinda Maheswari are tenth with Jung Kyung Eun/Kim Ha Na of Korea ahead of them as the No. 9 seeds.

China’s perennial top guns in Mixed Doubles head the seedings in this category with Olympic champions, Zhang Nan and Zhao Yunlei, seeded No.1 and their compatriots, Xu Chen and Ma Jin, at No.2. The latter probably still have nightmarish memories of Guangzhou last year when they squandered two match points in the final versus Indonesia’s Tontowi Ahmad and Liliyana Natsir. If they are thwarted again this time it won’t be at the hands of the title-holders who have withdrawn due to an ankle injury which Ahmad suffered in June and thus Xu/Ma have moved up to the No.2 spot.

The evergreen Joachim Fischer Nielsen, partnered by Christinna Pedersen and seeded No.3, will be keen to do well in front of family and friends as one of Denmark’s leading prospects for success in this tournament. Chris and Gabrielle Adcock (England) are the No.4 seeds and will be keen to add to their Commonwealth Games gold with a strong showing in more testing circumstances. Ko Sung Hyun and Kim Ha Na (No.5) have found decent form for Korea of late as have Germany’s Michael Fuchs and Birgit Michels, seeded sixth.