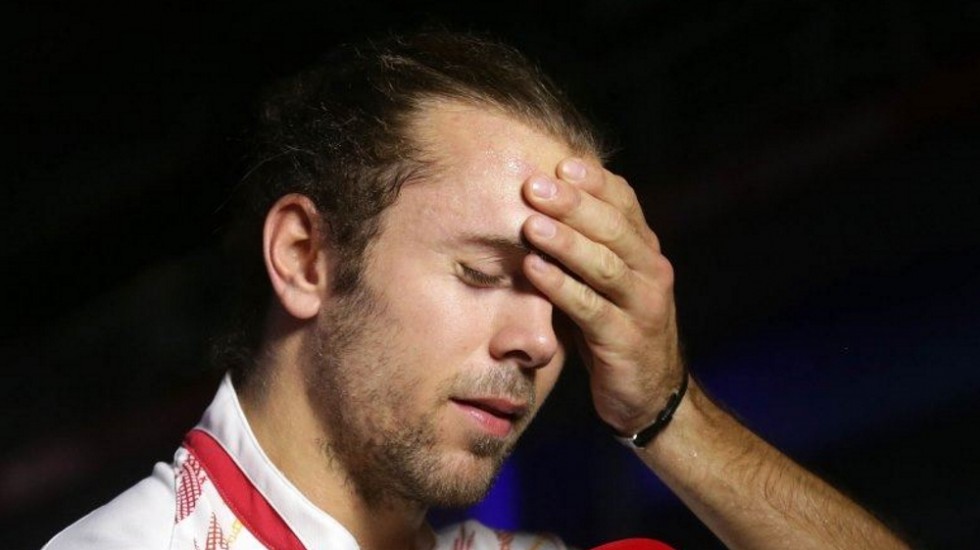 Jan O Jorgensen’s dream of emulating compatriot greats like Flemming Delfs and Peter Rasmussen vanished in 23 minutes of pain, panic and numbing disbelief in the third round of the Men’s Singles tonight.

The vastly improved world No.3 had progressed well enough to nurture hopes of becoming the home country’s third World Men’s Singles champion, but they were suddenly destroyed by an injury to his right knee which began after only two points against Chinese Taipei’s unseeded Chen Chou Tien.

“The whole dream suddenly burst,” said a gutted Jorgensen (featured image), who struggled on courageously before 5,000 increasingly crestfallen Danes before retiring at 21-9 9-4 down.

“I am very upset. I have been preparing very well, I had a good draw, it was perfect conditions – perfect everything.

“My first feeling was one of panic. It was the worst thing that could happen. I would prefer losing and giving a good fight. Not being able to fight – that’s really tough.” Jorgensen’s shattering retirement gives Chen a quarter-final versus another Dane, the 14th seeded Viktor Axelsen, and may eventually offer Lee Chong Wei, the top-seeded Malaysian, a better chance of his third final in a row.

Though Lee has never gone the full distance, his 21-11 21-12 win over Scott Evans of Ireland suggested that, at the age of 31, he may be keeping enough fuel in the tank to do so this time in the Li-Ning BWF World Championships at Ballerup Super Arena.

One who would no doubt dispute that is Chen Long. The Chinese player, with his athletic mid-court containment, was similarly unruffled during a 21-12 21-10 win Meanwhile, Wang Shixian – the reigning All England champion – was one of two Chinese players to reach the Women’s Singles quarter-finals. Remarkably, Wang Yihan, the World champion three years ago, wasn’t one of them. She appeared fatalistic and leaden-footed as she was mowed down 21-9 21-12 by the left-handed attacks of Carolina Marin (above), the 21-year-old who is the finest player ever to emerge from Spain. However, another Thai Mixed Doubles pair, Sudket Prapakamol/Saralee Thoungthongkam (above), overcame local hopefuls Anders Kristiansen/Julie Houmann in a thriller. The second game was a touch-and-go affair, with the Thais holding two match points before the Danes grabbed the opportunity on their third game point. They were unable to retain the momentum early in the decider and could never find their way back as they lost 21-19 23-25 21-11 in 74 minutes.

It was a perfect day for China in Mixed Doubles as four of their pairs made the quarter-finals. Apart from the top two seeds Zhang Nan/Zhao Yunlei and Xu Chen/Ma Jin, Liu Cheng/Bao Yixin and Kai Lu/Yaqiong Huang (below) too made it to the last-8. Kai/Yaqiong put out Korean No.5 seeds Ko Sung Hyun/Kim Ha Na 18-21 21-18 21-13, while last year’s finalists Xu/Ma faced little trouble from Singapore’s Danny Bawa Chrisnanta/Vanessa Neo (21-14 21-18).