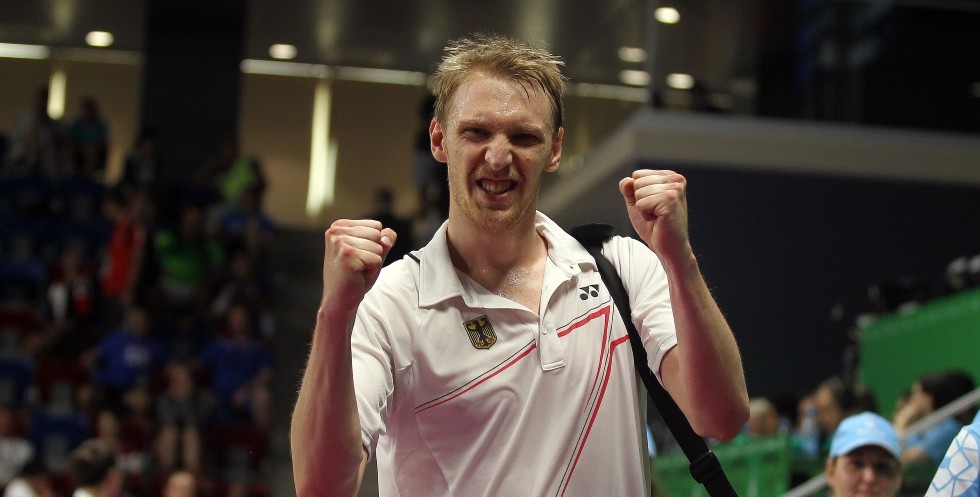 Lee Chong Wei’s swift and smooth start amid a potential challenger’s surprise demise was the highlight of the first evening of the Li-Ning BWF World Championships in Copenhagen today.

In what is almost certainly his best chance of winning the Men’s Singles title, the Malaysian maestro disposed of Korea’s Lee Dong Keun, 21-11 21-12, suggesting that his lengthy preparations may have been well conceived.

Meanwhile, Kashyap Parupalli’s euphoria of Commonwealth Games glory a few weeks ago, was abruptly ended with a tough loss to Dieter Domke (featured image), a German ranked outside the top 40. The 26-24 13-21 21-18 demise was a reminder of the Indian’s Thomas Cup failure versus the same opponent in May. This result means it’s Domke who faces Lee Chong Wei (below) in the second round in Ballerup Super Arena. The world No.1’s victory over his Korean namesake contained a higher ratio of fast airborne attacks than accustomed in his usually well-varied game. His movement was also outstanding, even by his exceptionally light-footed standards, and there was no obvious sign of his long-lasting groin injury. The manner in which Lee surged from 3-4 down to 11-4 in the first game showcased a sequence of the most spectacular and penetrating attacks, six of the seven points coming

from smashes and the other from a piercing mid-court kill.

It set the tone of the match and made the favourite’s millions fans dream of what might happen this week. With Chinese title-holder Lin Dan absent, and both Japan’s Kenichi Tago and Simon Santoso of Indonesia withdrawing, the veteran shuttler may never have a better chance at the coveted honour.

It is two months since he last competed – a loss to Tago in Indonesia – but there was no lack of match sharpness and a mental freshness which also appeared in the buoyancy of his answers to the media.

Despite that the 31-year-old legend declined to agree that this a chance like no other of taking the world title that has somehow eluded him. “I’ll try my best, that’s all,” he said, a little predictably, before adding more insight. “But today I was very aggressive and I was happy with my performance.”

Chong Wei also claimed he could still feel the injury but reckoned he has “nothing to lose.”

Meanwhile, Parupalli looked the likely winner when he quickly erased a four-point deficit at the change of ends in the third game, but Domke showed what a tenacious fighter he is, prevailing by force of will more than anything.

Two other seeds in Lee’s half also progressed unscathed. Wang Zhengming, the sixth-seeded Chinese player accounted for Michal Rogalski of Poland, 21-15,21-12, and could meet the Malaysian in the quarters. Jan Jorgensen, the dangerously improving world No.3 who should be at his best on home soil, outplayed Maxime Moreels of Belgium 21-15, 21-11. In June the Dane won his first Indonesia Open Superseries title and shortly before that beat Lin Dan, who has six more days as world champion. Jorgensen and Lee could clash in the semi-finals.

Elsewhere, it was a disappointing day for Vladimir Ivanov of Russia who lost both his Men’s Singles and Men’s Doubles matches. He was beaten 21-19 21-16 by Petr Koukal of the Czech Republic before going down 21-18 21-18 with Ivan Sozonov against hometown pair, Mads Conrad-Petersen and Mads Pieler Kolding (above).

By contrast, Cheng Wen Hsing and her Mixed Doubles partner, Chen Hung Ling won both their matches. The Chinese Taipei duo (below) defeated Sam and Chloe Magee of Ireland (24-22 21-17) before they came from a game down with their partners to advance in Women’s Doubles and Men’s Doubles respectively.