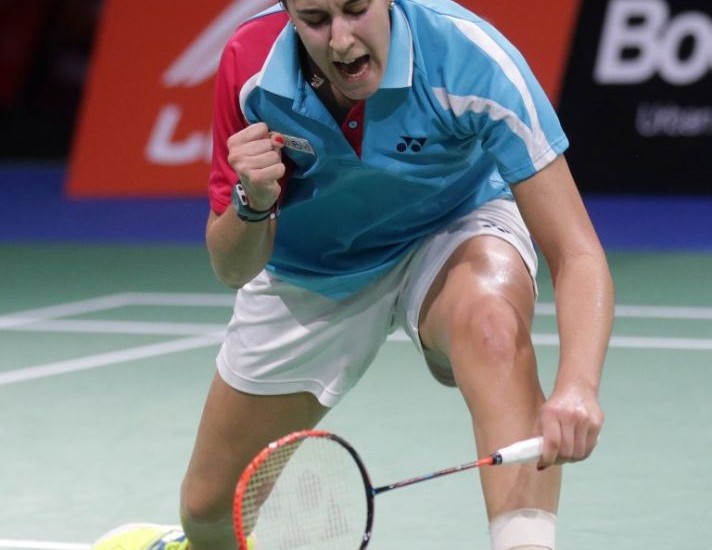 The rise of the tenacious talent from Huelva continued in grand style as she became the first Spaniard to reach a badminton World Championship semi-final,

clawing from within two points of defeat to upset the Women’s Singles seedings for the second successive day. She is guaranteed at least a bronze medal if she loses tomorrow.

At 19-19 in the second game against the No.8 seed, Marin needed courage, good shot selection and steady nerves. She found them all.

She was helped by Tai allowing a lift to fall, and watching it land in, but then on game point projected one her steep piercing smashes and created enough of an opening to follow it with a kill.

It transformed the match. She took the first seven points of the decider and was in control thereafter, tumbling to the turf in jubilation when the last point was achieved.

Wrestling with her emotions afterwards proved a more difficult prospect. “I feel so tired. It was a very tough match. The first set was 50-50 until the end and she took the first set. The second set, I was leading all the time but at the end I began feeling nervous but I just kept fighting to the end. And the third set, I think she was really tired and I just kept the shots on court and that’s why I won the match,” she said, thanking the frenzied fans for their support.

Her semi-final is against PV Sindhu, the 19-year-old Indian who has managed two great survivals of her own. Marin prevailed in their last encounter at The Star Australian Open in June but takes little comfort from that, noting tomorrow’s match will be different. Meanwhile, Axelsen (above) – Denmark’s badminton prodigy who has already tasted World Championships success at junior level – revived the spirits of a sold-out Ballerup Super Arena, with an authoritative 21-14, 21-14 display against Chen Chou Tien of Chinese Taipei. He had expected to see team-mate Jan Jorgensen across the net from him but, with the ponytailed star cruelly cut down by an on-court injury on Thursday evening, Axelsen took matters onto his own racket…and delivered!

For his energetic efforts, he gets a crack at world No.1 – the legendary Lee Chong Wei (left); winner of more than 50 titles. The Malaysian moved to within two triumphs of the World title which has mysteriously eluded him, sweeping into the semi-finals in less than 40 minutes.

He overcame China’s Wang Zhengming in such quick time partly by adopting a more assertive style – seeking to put the shuttle on the floor earlier in the rally, and often succeeding.

“I’m pleased – we’ll see what I can do tomorrow,” was nevertheless the limit of his optimism. Yu Yang and Wang Xiaoli (above), the only defending champions still surviving, are going well, not having dropped a game yet in their quest to repeat as Women’s Doubles title-holders. China could yet win four of the five titles, as they provide two of the semi-finalists in this category too.

In Men’s Doubles, it is the Koreans who are making big headway, providing three of the semi-finalists and the Chinese who are dominating Mixed Doubles, also with three semi-finalists. In both instances, it’s Danish partnerships which are the sole resistance, with Mathias Boe/Carsten Mogensen and Joachim Fischer Nielsen/Christinna Pedersen respectively standing in the way of their visiting peers. Boe and Mogensen have a formidable task in the semi-finals as they face No.2 seeds Lee Yong Dae/Yoo Yeon Seong (Korea; below), who dismissed Chinese Taipei’s Lee Sheng Mu/Tsai Chia Hsin 21-16 21-13.

A packed and appreciative audience absorbed all the evening’s action, especially the crowd-inspired fightback by Fischer Nielsen and Pedersen to scramble into the final four at the expense of Indonesia’s Praveen Jordan and Debby Susanto, 21-12 20-22 21-18. The remaining two days of the Li-Ning BWF World Championships promise much more drama and, should Danish fortunes be involved, one can expect the loudest noise in Ballerup since its Super Arena was built.