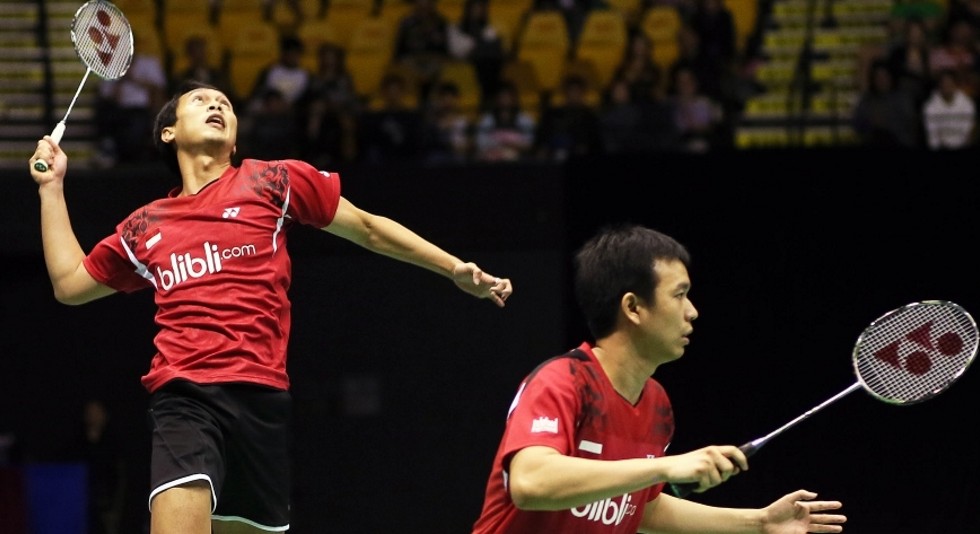 Indonesia’s ambitions in the Li-Ning BWF World Championships 2014 have been severely dented with the withdrawals of Men’s Doubles defending champions, Mohammad Ahsan/Hendra Setiawan, and Simon Santoso in Men’s Singles.

PBSI International Relations Manager Bambang (Rudy) Roedyanto today informed the Badminton World Federation that these competitors were being withdrawn from the tournament due to injury, with Ahsan (featured image; with Setiawan) having re-injured his back and Santoso being diagnosed with dengue fever last night.

“It’s a disaster for us – what can I say. We are leaving on Thursday morning and we have no choice (but to withdraw them). They cannot play,” he said.

This news completes a triple whammy for Indonesian badminton, with the earlier withdrawal from the World Championships of the defending Mixed Doubles pair, Tontowi Ahmad and Liliyana Natsir due to an ankle injury which Ahmad suffered in June.

As the World Championships draw has already been done, there will be no replacements for either Ahsan/Setiawan or Santoso. Ironically, Santoso was catapulted into the Men’s Singles line-up on the morning of the draw, after China withdrew last year’s semi-finalist, Du Pengyu.

“It’s the second time Ahsan has had lower back pain and it has gotten worse in the past few days while he has been training. He cannot even sit down properly now so, of course, he can’t move well or jump-smash and the doctor says he should not go,” stated Roedyanto.

Meanwhile, Santoso (below) has been hospitalised after falling ill yesterday.