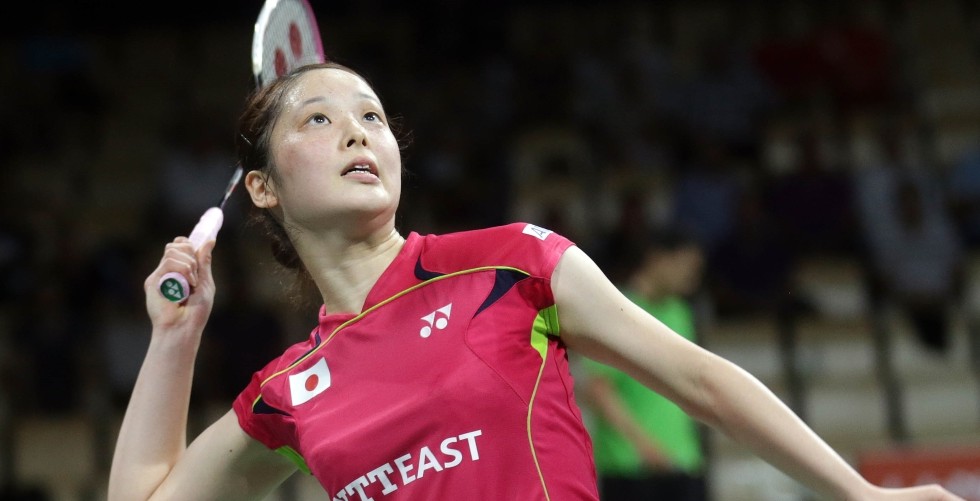 There will be a new Women’s Singles queen as Minatsu Mitani of Japan knocked title-holder, Ratchanok Intanon, out of the Li-Ning BWF World Championships today in a last-16 battle.

The Thai teenager’s defence ended dramatically as she outplayed the 22-year-old former French Open winner in the first game, only to suffer the reverse in the second and then be caught up in a point-for-point tussle in the decider. The No.16 seed beat the fourth-seeded Intanon (above), 8-21, 21-12, 21-18 after a bewildering turn-around which sometimes seemed to surprise its perpetrators as much as it did the crowd. It happened partly because Mitani’s wonderful court coverage applied constant pressure, and because she refused to die when 13-16 and 17-18 down in the decider.

It may also have happened partly because Intanon, who took her disappointment with wonderful grace, was hospitalised for five days with a high fever not long

before the tournament and did not quite last the pace.

“I didn’t think about defending the title,” said last year’s champion. “I just came here to give my all and do my best.”

Meanwhile, having witnessed the demise of team-mates in Men’s Doubles, Women’s Doubles and Women’s Singles earlier in the afternoon, the Japanese winner really wanted to do well for her country.

“She was one of my targets to beat,” said Mitani (featured image), who now opposes Sung Ji Hyun of Korea. “I put the first game behind me and tried to defend well and be patient in the long rallies. The final game was very tough but I wasn’t nervous. I was ready for the challenge.” Saina Nehwal, India’s most successful female player, made a great escape from the verge of defeat to earn a quarter-final with the top-seeded Olympic champion, Li Xuerui, of China who triumphed 21-9 21-17 over her compatriot Han Li.

Nehwal was in serious danger at 13-16 and 17-18 down in the second game of an absorbing 14-21, 21-18, 21-12 victory over Sayaka Takahashi, a Japanese left-hander seeded six places behind her at number 13. She also survived an instant review at 18-18 which might have taken her taller, quicker and more attacking opponent even closer to victory.

Once Nehwal survived that game – thanks to her mental strength, crisis experience, and steadiness – the mood of the match was transformed, and she dominated the decider. Her compatriot, PV Sindhu (left), also came through a nervy test of wills versus Korea’s Bae Yeon Ju, finally taking her sixth match point to seal the deal, 19-21 22-20 25-23.

The seedings say that Li’s opponent in Sunday’s final should be her compatriot Wang Shixian, another whose wing-heeled movement carried her to victory – 21-12 21-7 – against Vu Thi Trang of Vietnam. Yesterday’s seed-beater, Michelle Li, however, was halted. The Hong Kong-born Canadian lost 21-16, 21-11 to No.8 seed, Tai Tzu Ying of Chinese Taipei. Women’s Doubles also saw some seismic developments with the defeats of the No.2 and No.3 seeds respectively – Christinna Pedersen/Kamilla Rytter Juhl (Denmark) and Misaki Matsutomo/Ayaka Takahashi (Japan). The latter lost to Koreans, Lee So Hee/Shin Seung Chan, 21-14 21-15, while the Danes were defeated 21-15 21-19 by Nitya Krishinda Maheswari and Greysia Polii of Indonesia (above).

“We have beaten them before but we knew it would be tough because they are great players and they were on home court. We are happy but we still have a long way to go,” said Polii, whose giant-killing team-mates Anggia Shitta Awanda/Della Destiara Haris also made it to the quarter-finals. Not ruffled by the upsets around them, China’s Wang Xiaoli and Yu Yang remained on track to defend their Women’s Doubles crown; the lone champions from last year who can still repeat. They overcame Korea’s Jung Kyung Eun/Kim Ha Na, 21-12 21-18 while Olympic gold medallists, Tian Qing/Zhao Yunlei, also progressed to the last eight for China.

Eric Pang (right) of the Netherlands created a stir too as he thwarted Thailand’s Tanongsak Saensomboonsuk to advance to the Men’s Singles quarter-finals, prevailing 19-21 21-18 21-16. Denmark’s Victor Axelsen booked his spot, brushing aside the challenge of Nguyen Tien Minh of Vietnam (21-16 21-17).