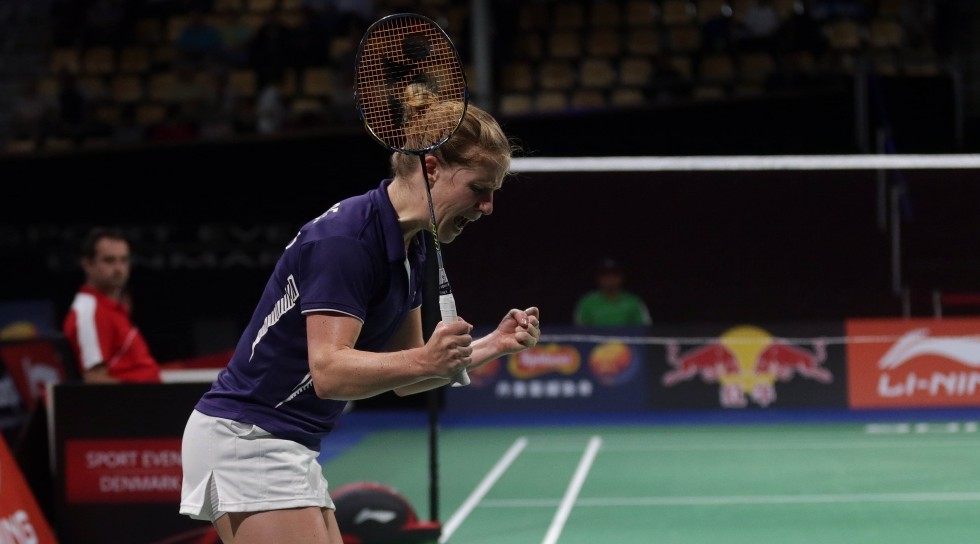 Kento Momota, who helped make history at the Thomas Cup, suffered a dramatic reversal of fortune today when he became the first seed to be beaten at the Li-Ning BWF World Championships.

The Japanese had been a winner in his country’s stunning capture of the Thomas Cup title, but was unable to capitalise on a lead of a game and 15-11 against Wei Nan, the Hong Kong player whom he had overcome in Delhi, in their Men’s Singles first round match.

The 13th seed from Kagawa’s attack blew itself out completely in the third game of a 18-21 21-18 21-12 loss in which Wei, the world No. 20, began to realise he had unexpected physical superiority. “I was very upset by what happened in our match in Delhi,” Wei (above) confided about an encounter in which he won only 23 points. “So I made the best preparation I could this time. I also told myself I must struggle hard when I was losing.”

Wei was suddenly able to turn a four-point deficit into parity at 15-15 in the pivotal second game. At that stage Momota, who had been winning many points by playing the shuttle tight to the net and cleverly picking off chances to score with fast slices, well-placed smashes, and jabs, suddenly looked in difficulties.

His movement deteriorated, and his capacity for landing his angular left-handed attacks almost disappeared. Even though he got his nose ahead again at 16-15 and 18-17, the finish line receded frustratingly from his view.

Wei played a patient and consistent long rally to reach 19-18, which perhaps more than any single moment helped turn the match.  At game point down Momota made a sudden gamble on another attack and dragged the shuttle wide.

Momota volunteered that he had damaged his left knee in training, but declared that this was not intended as excuse for the defeat.

“One of the reasons I lost was that from 10-6 in the second game I didn’t try to win the points with the right shots. I wasn’t patient. My opponent was patient.”

Momota may also have been disappointed by having to play so highly ranked a player so early in the tournament, and his spirit appeared to wane as the match slipped quickly away from him.

In Women’s Singles, Commonwealth Games runner-up Kirsty Gilmour was bounced out by Karin Schnaase – the German’s second straight win over the Scot. The 21-15 21-15 result will see Schnaase (featured image) take on sixth seed Bae Yeon Ju (Korea) in the second round. Sweden’s Jonathan Nordh/Emelie Lennartsson (above) caused some ripples by taking down a pair ranked 21 places above them. Nordh/Lennartsson were comfortable winners over Indonesia’s Gideon Markus Fernaldi/Rizki Amelia Pradipta, 21-18 21-11. Another surprise was the loss of Kim Ki Jung/Kim So Young (Korea) to Chinese Taipei’s Liao Min Chun/Chen Hsiao Huan, 14-21 21-15 21-18.