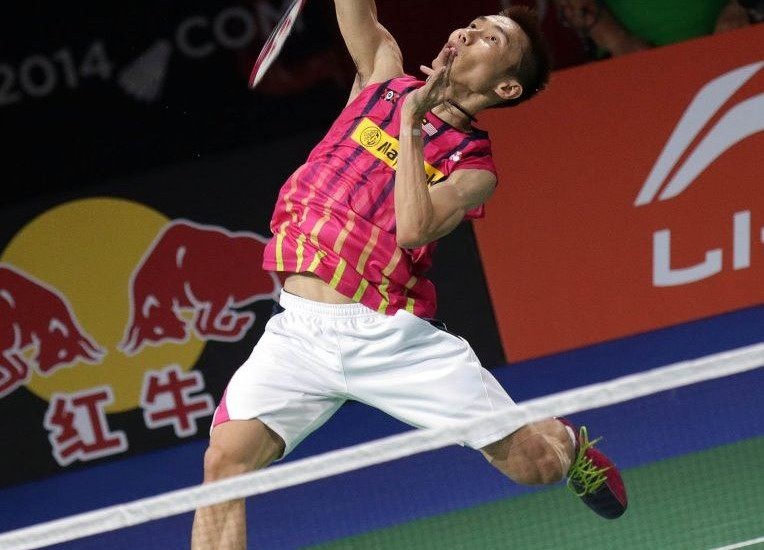 World No.1 Lee Chong Wei produced his best performance of the week today to be a step away from the elusive Men’s Singles World Championship that would further enhance his already legendary status.

The Malaysian master (featured image) covered the court with the brilliantly balanced movement which is his trademark, while also striking a much higher ratio of winners than usual, as he dismissed the youthful challenge of Viktor Axelsen in only 33 minutes (below). Surely the 21-9 21-7 semi-final result was a lesson which the unfortunate Dane will not easily forget. That trampling triumph earned Lee his third successive World Championship final and made it harder to believe than ever that such a stunning player has yet to win one.

“Yes I’ve got better with each match,” Lee agreed, in jovial spirits. “I will try to be better again. I know my country really wants to have a World champion, and there is a lot of pressure. I will try to enjoy it.”

Only in a brief period at the start of the second game did it seem the 20-year-old Axelsen had any chance of getting into the match, though his 5,000 supporters tried to find reasons to cheer.

One of them came when the tall Dane completely wrong-footed Lee with a disguised flick lift from the mid-court to reach 5-5 – though he may have wished he had not done it. Lee soon got his own back with a flick serve before moving to a higher gear, allowing his opponent only two more points.

“I believed I had to play super well, but my mind and my body would not cooperate,” said Axelsen. “The better player won today.” Just as the Japanese dynamo had during her shock wins over Ratchanok Intanon and Sung Ji-Hyun, she began to move better after losing the first game – but Li was ready for it.

“I was aware of this and with my coach we made a plan to deal with it, and it worked,” said Li, last year’s runner-up. From 10-11 down, the 23-year-old scored very heavily with sharp and ambushing smashes and kills, taking six points in a sequence which ended any doubts about the outcome with stunning speed.

Mitani’s consolation of a bronze medal made her the first Japanese Women’s Singles player to win a World Championship medal since Hiroe Yuki in 1977.

China became sure of winning the Women’s Doubles for the 11th time in a row, when Zhao Yunlei and Tian Qing (below) joined Yu Yang and Wang Xiaoli (right) in the final. The latter’s 21-8 21-13 win over Reika Kakiiwa and Miyuki Maeda of Japan earned them the chance of lifting the title for a third successive occasion, something never previously achieved in this category. There will however be an unexpected pair in the Men’s Doubles final after the No.12 seeds, Ko Sung Hyun and Shin Baek Choel of Korea, advanced without striking a shuttle. Their compatriots Kim Ki Jung and Kim Sa Rang withdrew because Sa Rang has a bad neck.