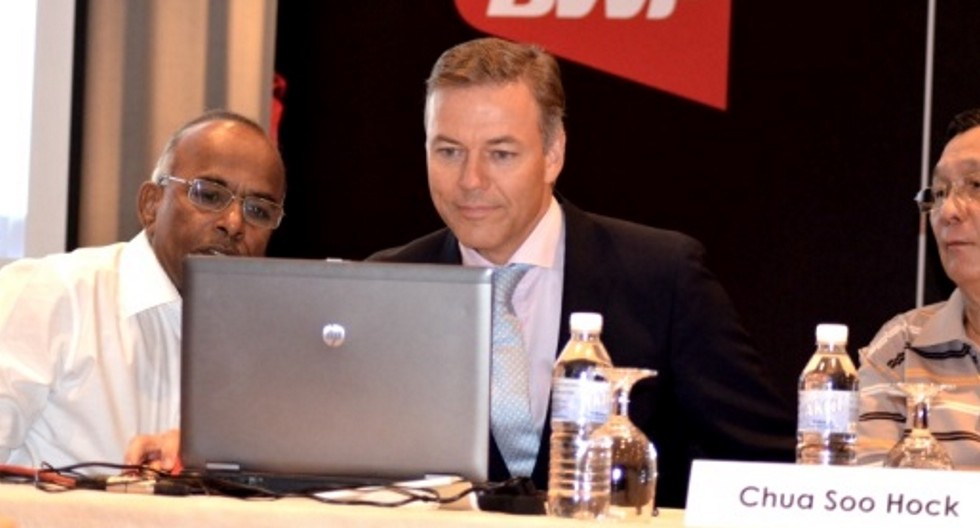 Li-Ning BWF World Championships 2014: Jorgensen and Santoso in the ‘Wei’

Lee, silver medallist at the last two BWF World Championships, is keen to claim his maiden World title in the absence of perennial nemesis and five-time champion Lin Dan of China. However, a late-breaking change and today’s draw by the Badminton World Federation (BWF) threw some potential hazards in the Malaysian’s path.

Returning from an injury lay-off, Lee opens his campaign against Korea’s Lee Dong Keun but he will be wary of letting his guard down as Commonwealth Games champion Kashyap Parupalli is a likely opponent in the second round. Despite a 4-0 head-to-head record in the World No.1’s favour, the Indian will fancy his chances after the biggest win of his career in Glasgow recently. If Lee plays to form, he should have little trouble until a potential clash with either hometown hero, Jan O Jorgensen, or

Indonesia’s Santoso in the semi-finals. Ironically, the latter – who defeated Lee for the Singapore Open title – was only added to the Men’s Singles draw this morning after the late withdrawal of China’s Du Pengyu, a bronze medallist last year.

At the opposite end of the draw is China’s Chen Long (2), who will be keen to salvage a disappointing year by his high standards. He hasn’t enjoyed success since victory at the Korea Open in January and certainly will have more pressure on him to deliver the goods with Du’s departure and Lin Dan’s non-qualification.

Denmark’s Jorgensen, winner of the BCA Indonesian Open, will be among the favourites. Not only has he beaten the likes of Lin Dan, Chen Long and Kenichi Tago in recent times, he will be playing on home turf, which makes him a formidable prospect. Japan’s Tago too is among the contenders as one of the few to have beaten Lee this season.

While most of the seeds in Men’s Singles have comfortable opening round matches, there are a few evenly-matched contests, such as Takuma Ueda (Japan) against Tian Houwei (China, 11) and Rajiv Ouseph (England) against Chong Wei Feng (Malaysia, 16). Compared to the other events, all the stars in Men’s Singles will be seen in action on the opening day.

The draws for all five categories were released by BWF at a ceremony this morning in Kuala Lumpur which was attended by the Danish Ambassador to Malaysia, Nicolai Ruge; Li Zhujun, Director of the Indoor Sports Business Unit of title sponsor, Li-Ning; representatives of Badminton Association of Malaysia, and the local media. BWF Referees Assessor, Chua Soo Hock, officially witnessed the draw.

Men’s Doubles rival Mohammad Ahsan/Hendra Setiawan (Indonesia) and Lee Yong Dae/Yoo Yeon Seong (Korea) are at opposite ends of the draw and both have first-round byes. Veterans Koo Kien Keat/Tan Boon Heong (Malaysia) have reunited and will make it to Round 2 without hitting a shuttle. The most interesting Men’s Doubles opening match is likely to be between Mads Conrad-Petersen/Mads Pieler Kolding (Denmark) and Vladimir Ivanov/Ivan Sozonov (Russia).

“The World Championships represent the pinnacle of any sport. It is every player’s dream and ambition to be a World champion. It’s a career-defining moment and it signals that you are the best at what you do. There’s all to play for and, with so many talented competitors in the reckoning, we can expect great drama and surprises at these World Championships,” said the former two-time World champion.

Various guests were invited to participate in the electronic draws. Danish Ambassador to Malaysia Nicolai Ruge released the draw for the Men’s Doubles, while Li Zhujun released the Men’s Singles and Women’s Singles draws. Media representatives did the other draws. “It’s a great honour for us to be the title sponsor of the BWF World Championships and the official partner of BWF,” said Li Zhujun. “We hope to make badminton internationalised and welcomed all over the world. We are grateful to BWF and happy that the World Championships will be in Copenhagen.”

Also present at the draw were Malaysian Men’s Doubles coach Pang Cheah Chang and No.7 seeds Tan Wee Kiong/Hoon Thien How. It was the first such experience for Tan, winner of the Commonwealth Games Men’s Doubles gold medal (with Goh V Shem).

“It’s my first time attending a draw ceremony,” said Tan. “I hope this will bring luck to our team at the World Championships.”

The Malaysians have a bye in the opener and meet either Lukasz Moren/Wojciech Szkudlarczyk (Poland) or Matijs Dierickx/Freek Golinski (Belgium) in the second. Analysing their draw, Tan said their first big test would probably be in the third round versus Takeshi Kamura/Keigo Sonoda of Japan.