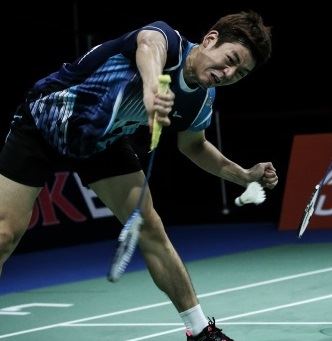 Traditional powerhouses China, Korea and Denmark continued to dominate the Li-Ning BWF World Championships but there were a couple of unexpected semi-finalists. Here are some snapshots of the action.

Featured image: The strain of defending a smash shows on Lee Yong Dae’s face as the Korean returns a shot during his Men’s Doubles quarter-final (with Yoo Yeon Seong) against Chinese Taipei’s Tsai Chia Hsin/Lee Sheng Mu. The Koreans won 21-16 21-13. Spain’s Carolina Marin gets a warm hug from her coach after she overcame Chinese Taipei’s Tai Tzu Ying 19-21 21-19 21-11 in the Women’s Singles quarter-finals. Chinese Taipei’s Tai Tzu Ying was a couple of points away from making the Women’s Singles semi-finals but was thwarted by Carolina Marin. Japan’s Minatsu Mitani has been the surprise package of the Li-Ning BWF World Championships so far, taking down two players seeded ahead of her.