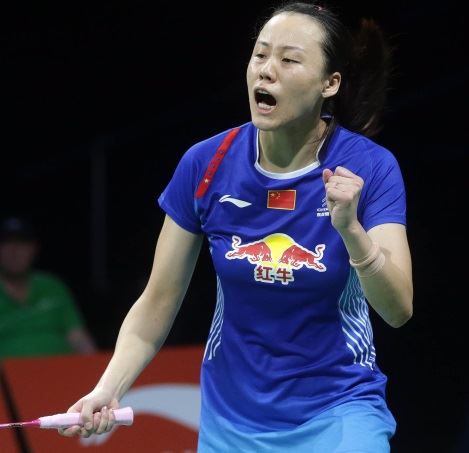 Zhao’s win in partnership with Tian Qing made it the 12th successive time that the Women’s Doubles had been won by China. Later she returned with Zhang Nan and captured the Mixed Doubles over compatriots Xu Chen and Ma Jin. In between, Shin Baek Choel/Ko Sung Hyun took the Men’s Doubles crown with an upset over Korean compatriots Lee Yong Dae/Yoo Yeon Seong.

Zhao and Tian’s 21-19 21-15 win over their compatriots Yu Yang and Wang Xiaoli also prevented Yu and Wang from winning the title a third successive time, and Yu for a fourth time in a row. The match tilted sharply in the direction of Zhao and Tian (above) in the second half of the second game, a phase in which they took eight of the last nine points. This was a sudden and startling sequence in a match which had previously been very evenly fought.

Zhao’s expression was revealing. “We feel emotional because we have been trying to win this title for a long time,” she said. “It feels so good that now we finally did it.”

Yu and Wang led 10-8 in the first game and 11-9 and 14-13 in the second, and there were moments when it seemed the titleholders might get on top.

But Zhao and Tian showed their ability to use their attacking formation flexibly, with Zhao arguably the best forecourt player of them all. At vital stages Yu, a former Olympic champion in this event, could not make her vast experience count. A mood-altering moment happened at 13-13 in the second game when Zhao and Tian allowed a shuttle to drop, thinking it would land out. Instead there was an interruption of two or three minutes, as the video replay displayed the shuttle out and a debate over the correct score ensued.

It was shortly after this that Zhao and Tian went on their winning run, the match being concluded by a spectacular Zhao block, struck with brilliant improvisation by a backhand stroke from wide of the right hip.

The Men’s Doubles produced an even bigger surprise. Lee Yong Dae and Yoo Yeon Seong, the favourites, were beaten 22-20 21-23 21-18 by Ko Sung Hyun and Shin Baek Choel (below), the 12th seeds, whose win was special because they had to spend a long time putting behind them the disappointment of a match point which slipped away at 20-19 in the second game.

A nerveless Yoo kill ensured that, but when it came to crisis moments in the deciding set, he was not quite able to deliver an escape again. It was his lift which descended just an inch beyond the baseline to give Ko and Shin another match point at 20-18 – and this time they took it.

They did so with another of many fierce exchanges, in which the shuttle hurtled at great speeds between the four men, and ended on the deck when Ko made a lightning reflex kill.

The match had lasted 80 minutes and in the third game Ko and Shin, who received a walk-over into the final, led 11-8, 13-10, and 19-17, always looking livelier, fresher and slightly more likely to edge the result.

“The walk-over did give us more time – more time to control our condition,” admitted Ko. “It was one reason why we could deliver a good performance today.”