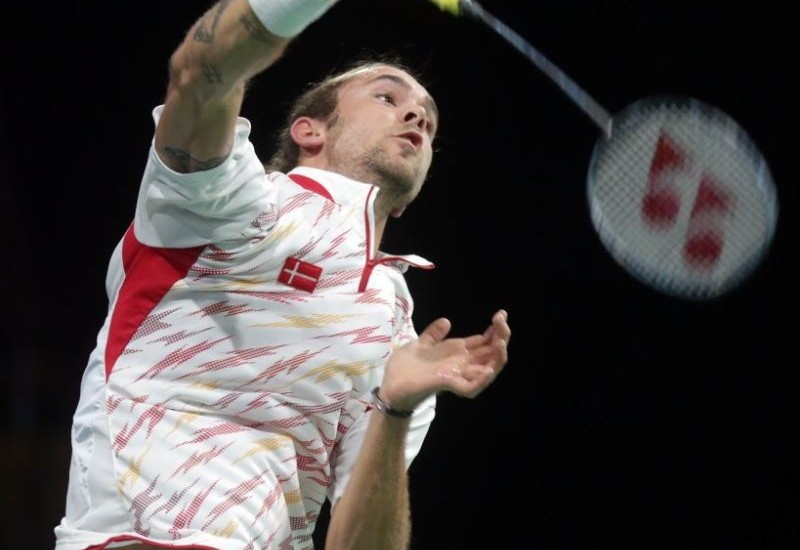 In an imposing performance, Jan Jorgensen maintained Denmark’s extraordinary World Championships tradition, romping into the last 16 of Men’s Singles this afternoon in front of family and friends. There was a brief moment of anxiety as the third-seeded home hope slipped and hurt his right foot during the second game of a 21-9 21-17 win over Finland’s Eetu Heino. It wasn’t long before Jorgensen’s focus returned to the great opportunity which may be opening up for him at the Li-Ning BWF World Championships.

This has been his finest year and, in a venue highlighting an astonishing badminton history for a country of a mere five million, the 26-year-old poster boy of this event must be yearning to add his name to the illustrious honour roll of Danish World champions which currently numbers ten.

That achievement makes the host nation the third most-successful country in the BWF World Championships, behind only China and Indonesia. Hence Jorgensen may feel that here of all places – with Copenhagen staging its fourth Worlds – he has his best chance of joining legendary compatriots like Flemming Delfs and Peter Rasmussen; World titlists both.

Though the sudden encounter with the slippery floor contributed to an eight-point,

second-game lead being halved, Jorgensen was “more than happy with the outcome”.

He has also avoided meeting a seed in the third round as Sho Sasaki, the 15th-ranked Japanese player was ousted, 21-16 21-19 by Chinese Taipei’s Chen Chou Tien (above).

Lee Chong Wei too mentioned a small injury, but the top-seeded Malaysian’s movement looked as light-footed as ever during a sparkling 21-12 21-9 triumph over Germany’s Dieter Domke. The iconic shuttler was so at ease that his greater concern seemed to be having his own car to transport him from hotel to venue – “like the tennis players”. Chen Long won impressively too: 21-11 21-10 versus Marc Zwiebler, the left-handed German. China’s top player pronounced himself “glad to be in the easier half”, perhaps alluding to absent fourth seed, Kenichi Tago of Japan.

It nevertheless contains Tommy Sugiarto, the fifth-seeded Indonesian who is trying to follow the footsteps of his dad’s World-title journey, and whose fierce, flat, mid-court game pressured the nimble Russian Vladimir Malkov to a 21-16 21-13 defeat.

Sugiarto apparently revelled in the warm conditions inside Ballerup Super Arena, stating “the wind doesn’t blow here like in Asia”.

While Chen has looked relaxed so far, the weight of expectation on him to deliver for his badminton-obsessed countrymen would have gotten a little heavier with the demise of team-mate Tian Houwei later in the evening. The No.11 seed perished unexpectedly, 21-15 21-16, to Eric Pang of the Netherlands. in the proceedings with the successes of Viktor Axelsen in Men’s Singles; Mathias Boe/Carsten Mogensen in Men’s Doubles; and Christinna Pedersen and Kamilla Rytter Juhl in a 21-12 21-16 Women’s Doubles nightcap over Thailand’s Puttita Supajirakul and Sapsiree Taerattanachai. Another Danish women’s duo – Line Damkjaer Kruse/Marie Roepke – dismissed Malaysia’s Vivian Hoo and Woon Khe Wei. Fellow-Europeans Eefje Muskens and Selena Piek (Netherlands; above) also progressed to the next round with a 21-17 22-20 win over Malaysia’s Ng Hui Ern/Ng Hui Lin.

It was a satisfying day for Korea as the perennially strong contenders boasted 100 per cent winning record, claiming all nine matches in which they competed. Three Korean Men’s Doubles pairs, including the steely Lee Yong Dae/Yoo Yeon Seong, and four Women’s Doubles duos have advanced to the last 16, along with the likes of Son Wan Ho, Sung Ji Hyun and Bae Yeon Ju (above) in the singles categories.