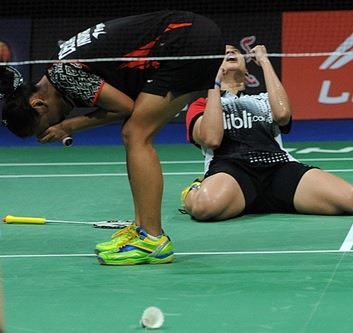 Indonesia’s squad – depleted by injury and illness to some of its stars – got an incredible lift today as unlikely heroines, Anggia Shitta Awanda and Della Destiara Haris, emphatically ousted the No.1 Women’s Doubles seeds.

The bubbly pair (featured image), who seemed as stunned as spectators by their 21-14 21-18 victory over the highly-fancied Bao Yixin and Tang Jinhua, sent early shockwaves through Ballerup Super Arena just as fans were settling into the third day of the Li-Ning BWF World Championships.

China’s top duo – who have dominated the badminton landscape with a string of impressive wins since their first outing at the Yonex Sunrise Hong Kong Open 2012 – were tipped to do well here in Copenhagen, if not take the title back home. However, the ease with which they were dispatched was contrary to the gritty, never-say-die attitude which has been the hallmark of their success so far. Whether in attack or defence they appeared to have few answers to their unheralded rivals who, ironically, were the opponents they beat for their first title at

the Yonex Dutch Open 2013. By contrast, Awanda and Haris grew in confidence and, from 12-12 in the second game, motored ahead. At 20-17 down, the Chinese saved one match point but could not pull off the kind of heroics that have seen them defy defeat on a number of occasions.

“I wasn’t confident. When the Indonesians changed tactics, I couldn’t adjust,” admitted Tang.

Bao noted they did not focus properly and paid the ultimate price in their first World Championships match together.

The ear-to-ear smiles that lit up the Indonesians’ faces said it all!

It was by far the biggest result of their careers.

“We are very happy and surprised but nothing is impossible. We went all out. We just played our game and didn’t think about winning,” said 22-year-old Haris, her 20-year-old partner nodding in agreement. There were also celebrations among the Germans, especially for the towering Johannes Schoettler who marked his 30th birthday with a 21-19 19-21 21-15 Men’s Doubles triumph. He and partner, Michael Fuchs, withstood a determined fightback from Thailand’s No.16 seeds, Maneepong Jongjit and Nipitphon Puangpuapech, to advance to the last 16. Also progressing were Malaysian veterans, Koo Kien Keat and Tan Boon Heong (right), who rolled back the years with a good 21-14 21-18 outcome over last year’s World Junior champions, Li Junhui and Liu Yuchen, of China. Japan also had reason to be buoyant as Hiroyuki Endo/Kenichi Hayakawa dominated Germany’s Peter Kaesbauer/Josche Zurwonne, 21-11 21-12, while their team-mates, Takeshi Kamura/Keigo Sonoda, snatched seven of the last eight points to send England’s No.14 seeds Chris Adcock/Andrew Ellis packing, 18-21 21-17 21-15.

Meanwhile, Canada’s Michelle Li (above) confirmed herself as a growing danger to the leading Women’s Singles competitors, following up the biggest title of her career by upsetting No.10 seed, Porntip Buranaprasertsuk, 20-22 21-18 21-11.

Having captured the Commonwealth Games gold medal earlier this month, the Hong Kong-born, Toronto-based player showed off an expanding range of strokes and a burgeoning ability to control the rallies, thus increasing the opportunities for a good tactical brain. “She was hitting a lot of winners in the first game,” Li explained. “I wanted to prevent her attacking so much, and knew I had a better chance if I kept the shuttle flat.”

Reflecting on her glory in Glasgow, she noted that experience – of being successful in a big tournament – “makes me feel I can fight for success in big tournaments like this one, this week.”

Li has the chance to show she can conquer a couple of rungs higher, for her next opponent will be Tai Tzu Ying, the eighth-seeded Chinese Taipei player. Tai beat Bellaetrix Manuputty of Indonesia, 21-12 21-14.

If Li wins again she may meet Wang Yihan, the Chinese star who won the World title three years ago, and who made a comfortable start to her bid, prevailing 21-13 21-13 against Anna Thea Madsen of Denmark.

Briefly it seemed there might be a Men’s Singles upset also, with Finland’s bearded and bandana-ed Ville Lang advancing demonstratively to a 7-6 lead in the final game against Hu Yun (above), the ninth seeded player from Hong Kong.

However, in the last few exchanges, Hu exhibited some relaxed and exceptional racket skills to secure the match, 17-21 21-15 21-17.