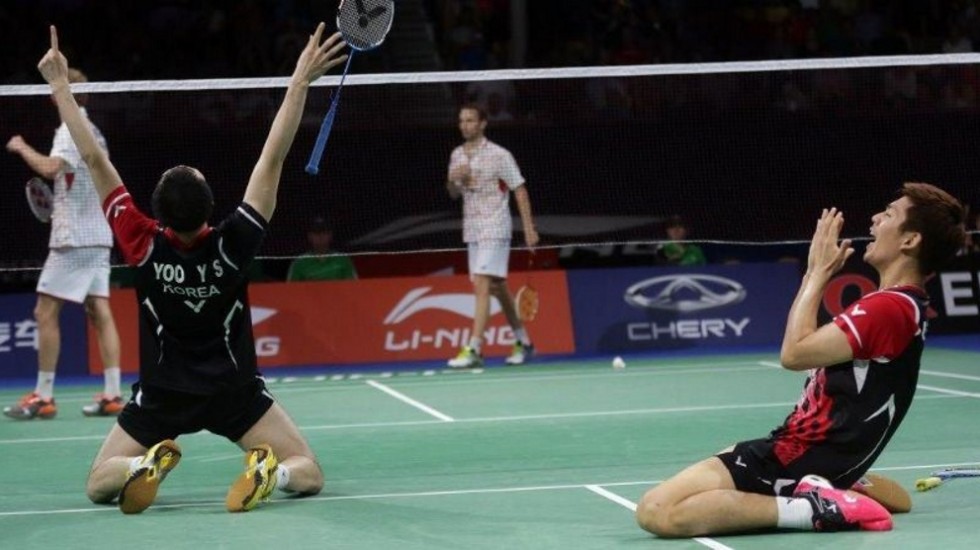 Carolina Marin, who had to persuade boys to hit with her so she could improve, became the first Spaniard to reach a World Championship final, beating up-and-coming Indian, PV Sindhu, in a taut, emotionally draining semi-final tonight. Marin’s 21-17 21-15 success also made her the first European in the Women’s Singles final for 15 years, and to do it she had to come through a quarter which included the former World champion, China’s Wang Yihan.

The 19-year-old Sindhu (left), conqueror of Wang Shixian, the second-seeded All England champion from China, had endured two very long matches in two days, and Marin’s tactics significantly took this into account.

“I doubted I could do well when I arrived here, but I spoke to my psychologist in Spain and he reminded me I had practised for two months and so could do well,” said the 21-year-old left-hander from Huelva.

Marin had moments of doubt during the match too, particularly when Sindhu, who had lost the first game in her

previous two matches, came back to lead 11-9 at the interval in the second game.

“I was reminded by my coach to stick to the game plan,” she recalled, apparently referring to the need to cut down on the riskier slices and smashes, and to keep Sindhu working.

It paid off. Increasingly Sindhu could not stay with the consistent pressure, losing nine of the last 11 points.

Marin’s reward is a match with Li Xuerui, the top-seeded Olympic champion from China. Formidable as this sounds, Marin may know how to deal with it.

“The most important thing is to enjoy it,” she noted.

China became certain of its second title when the two 2012 Olympic Mixed Doubles finalists came through for a repeat encounter. The Chinese were already assured of the Women’s Doubles title after this morning’s semi-finals. Zhang Nan and Zhao Yunlei, the gold medallists, won a semi-final full of lively patterns, although they were never led by their compatriots Liu Cheng and Bao Yixin in a 21-15 21-13 outcome. This gives Zhao the prospect of a World Championships golden double to match the Women’s and Mixed Doubles golds she boasts from the London 2012 Olympic Games.

Xu Chen and Ma Jin (above), the silver medallists, looked even sharper during a 21-15 21-9 defeat of Joachim Fischer Nielsen and Christinna Pedersen, the Olympic bronze medallists from Denmark. Xu and Ma have the chance to redeem themselves after wasting two match points in last year’s final.

Earlier, Chen Long (right) also gave China a chance of winning Men’s Singles when he advanced to the final versus Malaysia’s Lee Chong Wei. Despite yearning to follow in his father’s footsteps as World champion, Tommy Sugiarto, didn’t have what it took to stop Chen’s 21-16 22-20 progress.

However, arguably the match of the day was the Men’s Doubles between two more Danes, Mathias Boe and Carsten Mogensen, the former world No.1 pair, and the explosive Korean combo of Lee Yong Dae – the 2008 Olympic Mixed Doubles champion – and Yoo Yeon Seong.

Lee and Yoo (featured image) featured in a match of breath-taking switches between defence and attack and back again by 21-12, 21-18. However, it looked as though the Koreans would win more comfortably at 20-14 in the second game, only for the defiant Danes to make a last-ditch surge, roared on by a large, noisy and obviously partisan crowd.

They recovered to 18-20 and thought they had reached 19-20 when they launched yet another strident attack and saw the half-controlled shuttle come back close to the baseline – or so they saw it, beyond.

The Koreans had already sunk to their knees in celebration but were made to wait 30 agonising seconds while the Danes appealed to the instant review system. By half a centimetre it was “in” and they were beaten.