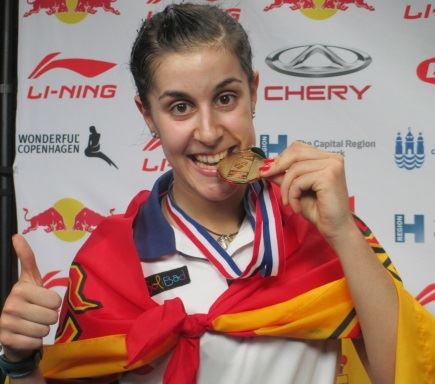 While Li’s loss was an unexpected blow for the Chinese, they still returned with three gold medals as Chen Long reversed his recent record against favourite Lee Chong Wei in the Men’s Singles final.

Marin, the 21-year-old Spaniard, became perhaps the most surprising world champion ever when she defeated Li, the top-seeded Olympic champion from China, in a Women’s Singles final of extraordinary fluctuations.

The ninth-seeded left-hander came from behind in both the second and third games to upset one of the game’s greatest shot-makers by 17-21 21-17 21-18. It made Marin (above; left) the first World champion from Spain, a country still at a developmental stage, and the first world singles champion from Europe for 15 years.

Marin’s amazing success was due to her great fighting spirit, her angular left-handed overhead smashes and drops, her refusal to limit the possibilities in her mind, and, most surprisingly of all, superior control in the crisis moments.

When she completed the upset with a low serve which elicited a return into the net from Li, she threw herself on her back and lay sobbing with her hands over her eyes.

“I don’t really have the words, because it’s so fantastic,” Marin said. “I wasn’t so nervous. I just set out to fight, fight, fight to the end. I began to believe it was possible. I thought she was tired. I just so much really wanted the gold medal at the end, and now I am incredibly excited.”

Li looked odds-on to win when she led Marin by a game and 15-12. But Marin suddenly conjured five points in a row and changed the character of the match.

The first signs that Li might be in real trouble came when her error ratio crept up and she slipped from 15-13 to 15-16 down in the decider. She then removed the tapes from her right leg, and had the area sprayed before continuing.

After that Marin knew she had a real chance of winning, and played her best badminton of the match. Li’s level went up too, but by then it was too late. Later the other singles top seed was also beaten. Lee Chong Wei fell in the final for the third time in a row.

This time Lee went down 21-19 21-19 to Chen Long (above), the No.2 seed from China.   Lee almost pulled back a six-point deficit in the second game, though his deft combinations of net shots, clears and ambushing attacks, were not consistent enough to cope with the broad, tenacious defence and sudden heavy counter-attacks of his physically more powerful opponent.

“I would like to thank my coach Li Yongbo,” Chen said. “But I am not yet world No.1. I will rest and get ready for the Asian Games.

Lee felt moved to apologise. “I am sorry that I didn’t win for my country,” he said. “I tried my best but I made too many mistakes.”