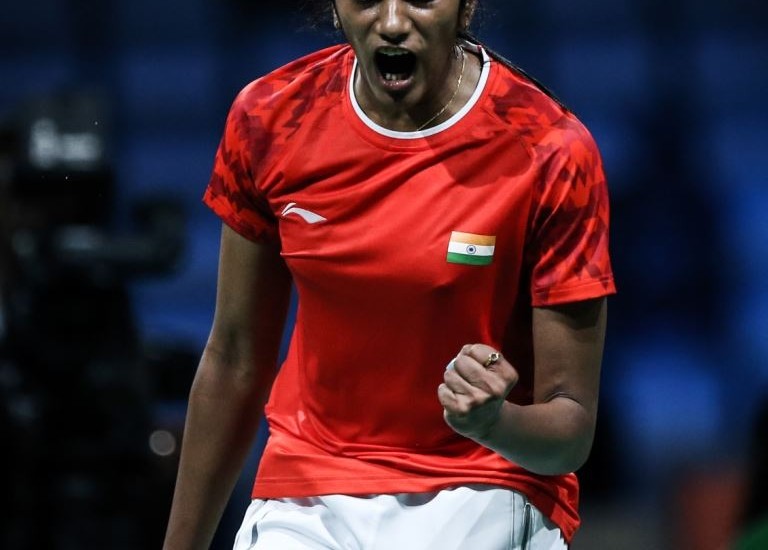 PV Sindhu – she of the barnstorming attack – upset the seedings for the second successive day and year, crashing the potential all-China finale to reach the Li-Ning That Sindhu (featured image) recovered from a game and 12-15 down to prevail after 85 exhausting minutes and after saving three match points to beat the sixth seeded Bae Yeon Ju in 75 minutes yesterday was truly remarkable.

Soft-spoken and friendly off-court, she has a uniquely damaging game – with steep smashes and a long reach – she has been playing the best badminton of her life and, before today’s epic, had beaten Wang three times.

“I didn’t feel tired after yesterday,” Sindhu stated. “My coach (Pulella Gopichand) was calling ‘one by one’ and I always felt it was possible to win again.

“Now I just want to do better than last year. I don’t want bronze again,” declared the high-achieving teen, already with joint third-place honours from Worlds in her treasure chest as a beaten semi-finalist last year in Guangzhou, China. Such a statement of intent underlined her commitment to challenging for the title.

That may create an extra thought or two for Li Xuerui, the top-seeded Olympic champion, who overcame the other leading Indian player, Saina Nehwal, 21-15, 21-15.

This was a victory in deeds and in words for Li, whose stroke play was too potent for Nehwal’s intelligent game and who afterwards claimed it would be unfair on

China to restrict nations’ player quota to three as Nehwal has advocated.

Li (below) now plays Minatsu Mitani of Japan, another who has also been both surprising and durable, overcoming the fifth seeded Korean Sung Ji Hyun, 8-21, 21-18, 22-20 in 65 minutes having beaten title-holder Ratchanok Intanon in three games and 60 minutes yesterday. The gritty dynamo – who would like nothing more than to celebrate her 23rd birthday on September 4 with one of badminton’s most coveted prizes – fought all the way. Even at 14-18 down in the decider, she refused to buckle. “I saw Ji Hyun was tired so I was trying to move her around the court and to play faster. I’m happy but I’m not thinking about it too much. I have another match tomorrow,” she reminded matter-of-factly.

These have been absorbing women’s matches – so absorbing that Chen Long, the men’s second seed, walked past court one to shout out “fight” to his girlfriend, Wang Shixian, while she was still in the thick of battle. It looked for a while, when he had a two-point lead in the final game, as though Son might win too. But Chen was very patient and scrapped out the win, even if it meant winning ugly.

He now faces Tommy Sugiarto of Indonesia (left), who continued to follow in the footsteps of his World champion father by coming from behind in both games against Eric Pang of the Netherlands in a 22-20, 21-19 win.

He was 16-17 down in the first and 11-17 in the second against an opponent revelling in opportunities to launch mighty smashes which were offered by Sugiarto’s defensive preferences. However, the Dutchman couldn’t maintain the precision needed against a professional like Sugiarto, who somehow remained calm when fire and brimstone was erupting around him. Meanwhile, Yu Yang and Wang Xiaoli, the only surviving World champions from a year ago, motored on impressively, beating Chinese compatriots Luo Ying and Luo Yu, 21-11 21-11.  In three matches, they have dropped no games and only 82 points. Confidently, they said they expect to lift the title again on Sunday. Also, still in the Women’s Doubles fray, are Olympic golden girls – Tian Qing and Zhao Yunlei (China) – and Japan’s Reika Kakiiwa and Miyuki Maeda (above).