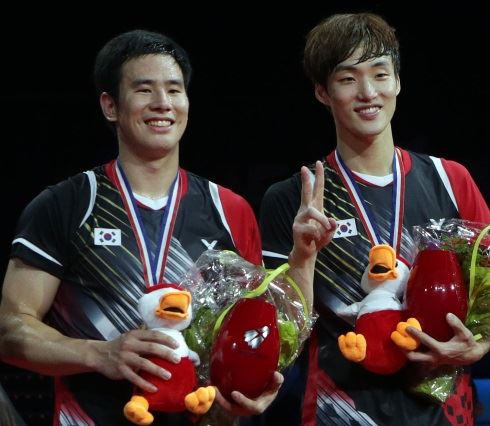 Li Xuerui’s loss in the Women’s Singles final was the only sour note in an otherwise impeccable Chinese performance as curtains fell on the Li-Ning BWF World Championships today. The Malaysian world No.1 trailed Chen for most of the match. Tentative from the start, and unlike his usual bustling, attacking self, Lee found himself parrying Chen’s ferocious attacks at critical moments in the 69-minute Men’s Singles final. A final kill at the net gave Chen his first World Championships gold medal.

“I have won the Denmark Open in Odense, but this is my first World Championships gold medal and I enjoyed this victory. I’d like to thank the Danish fans,” said Chen (below).

Women’s Singles: Carolina Marin authored one of the biggest upsets in history beating favourite Li Xuerui in the final to become the first Spanish World champion in badminton.

When Olympic champion Li netted her return on match point, Marin collapsed to the floor in tears. The 17-21 21-17 21-18 result capped a dramatic campaign for Marin, who beat Li’s compatriot and former World champion Wang Yihan in the third round. Marin’s (below) victory made her only the third European World champion since Lene Koppen in 1977 and Camilla Martin in 1999. It was third time unlucky for Lee Yong Dae in World Championships finals. The entire match was neck-and-neck between the two pairs. Played at high intensity and breathtaking speed, it was a couple of points that decided each game. Lee and Yoo saved one match point in the second game to force a decider. In the third game, Shin and Ko maintained a narrow lead throughout to eventually scrape through.

The winning shot, appropriately, was a brilliant backhand flick into a far corner by Tian Qing that denied Yu Yang an unprecedented fourth World Championships gold medal in Women’s Doubles.

Tian and Zhao  were the sharper pair. For much of the match, Tian and Zhao targeted Yu Yang. The reigning champions were also guilty of a few misjudgements at the baseline that eventually swung the match towards Tian and Zhao. “I’m very happy to win the World Championships for the first time,” said Zhao Yunlei. “My partner and I have worked hard for so many years. I now look forward to the Mixed Doubles final.”

“We’re very happy to play against Yu Yang and Wang Xiaoli,” said her partner Tian Qing. “We’re familiar with each other and happy we could fight each other in the final.”